Report on the Tonny Odera Harambee and Vote of Thanks

Tonny to travel to Kenya tomorrow via Ethiopian Airlines 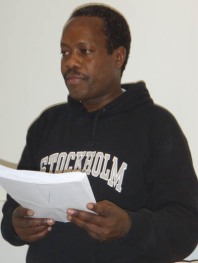 Leaves for Kenya tomorrow via ET to bury his departed father

The Tonny Odera Funeral Committee in Stockholm would like to thank everybody who participated in the Tonny harambee to make the function a success. The Committee would like to announce that the final figure after all tabulation stands at SEK 12,315. The harambee was necessitated by the demise of Tonny’s father in Kenya about a week ago. The task of the Committee was to raise money for Tonny’s ticket and any extra funds for funeral expenses.

The Committee would like to inform contributors and the public alike that Tonny will travel to Kenya on Monday, February 10th 2014 via Ethiopian Airlines with a brief stop-over at Adis-Ababa. Tonny will arrive in Kenya on Tuesday February 11th at 12.15 (noon) upon which arrangements have been made for him to be picked up for an onward trip to Kisumu. Tonny is expected home by Thursday, February 13th ahead of his father’s burial on Saturday, February 15th 2014.

Consequently, the Committee would like to thank all Kenyans, friends, sympathizers and well-wishers who turned up for the harambee to show solidarity with Tonny during a difficult and trying moment marked by great sadness and sorrow. Specifically, the Committee would like to thank various persons for their great in-put before, during and after the harambee.

In this respect, the Committee would like to thank Mr. Okulo Masala aka John Holiday, the only Kenyan Marine Engineer in Stockholm, for availing the venue at short notice. Many thanks to Prisca Försman for the huge input in food supply, a contribution which ensured that the mourners’ stomachs were kept full deep into the night. The mourners will remember the delicious Samosas that kept jaws smashing up and down continuously until the last man standing left the hall. It was all because of the good work of Prisca.

The Committee would also like to thank sister Malko for the wonderful work she has done since the sad news was broken by Tonny while many thanks also goes to Pastor Githuku wa Muirani who was one of the first to arrive at the venue and whose practical help at the function until close down in the morning requires no further elaboration. Likewise, the Committee would like to thank IT Expert Jasper Orieny who wired music and surprised the mourners with his D-jeying skills which kept sending guests back on the floor to shake beef. Apart from supplying the music, Jasper was also the Treasurer throughout the night and the Committee would like to send a big “Thank You” to him for accounts well kept.

This vote of thanks session would be incomplete without thanking Jacob Opande who was in charge of transport. It was great team-work of good hearted people that enabled the Committee to accomplish its mission.

In further acknowledging critical contributions, the Committee would like to thank Joseph Goga for chipping in early enough with great in-put together with brother Emperor Gor whose fantastic help somehow set the ball rolling at the Party during the initial stages. To those who made contributions which have not been explicitly mentioned here, please bear with us. Every contribution will forever be weaved into the eventual success of the function.

We thank you all for the wonderful speeches, rib-tickling jokes which kept the house jovial, messages of encouragement to the bereaved Tonny, snippets of convivial conversations on almost every topic and, most importantly, your priceless company throughout the night that brought real life at the function. For those who could not be with us but sent contributions, thank you very much!

Despite the heavy emotions that surreptitiously clouded the room due to the ever constant cognizance of the lugubrious circumstances under which events were unfolding as the function progressed, there was equally a strong, unspoken and invisible will that permeated the atmosphere that Tonny would eventually be able to travel and be part of his family as his loving dad is finally accorded his last rights in that mysterious resting place. To all of you, the Committee says “Thank you very much” for your love, compassion and solidarity.