Ideological Challenges Left Behind by the Late Dr. Adhu Awiti 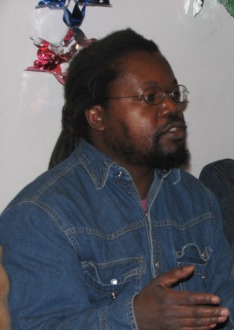 Mr. Okoth Osewe: Multi-Party system in Kenya has not resolved the bread and butter issues

As many relatives, friends and Comrades have aptly said, the death of Dr. Adhu Awiti, former MP for Karachuonyo, was not just devastating from the point of view of the huge void that Adhu’s departure has left behind. The death of this illustrious son of Kenya has also left a formidable challenge among Left-leaning Kenyan thinkers, political activists, fellow travelers and an assortment of Kenyan revolutionaries, active and retired.

Every time Dr. Adhu traversed the wilderness of Stockholm, he ensured that he touched base, not just to interact with the Onyangos, Wambuis, Ndambukis and the Kiplagats of Stockholm but also to avail himself for interrogation especially on core issues touching on the on-going struggle for liberation in Kenya. Adhu even accepted off-forum discussions and invited a coterie of Kenyan progressives in Stockholm to his abode in Nacka for an exploratory ideological analysis of Kenyan politics, past, present and future.

During these discussions, a dominant theme that is worth incorporating in Kenya’s political discourse following Dr. Adhu’s demise is the fate of ideological politics in Kenya and the challenges facing the Kenyan Left following theft of power by two suspected war criminals through election rigging. The situation is even more complicated because of the sudden conglomeration of latter day political opportunists of capitalist orientation within the opposition and the successful posture of imposters and other vultures of reaction as the “champions of the people”.

Although, from an ideological standpoint, there is no opposition to the rotten capitalist Jubilee political gangsters who took over State power, a significant section of the Kenyan masses has been convinced (through hysteria and political demagoguery) that an opposition does exist. The dilemma Adhu’s departure has left behind is that despite his illustrious political career that saw him detained under the former KANU/Moi dictatorship, and despite Adhu’s commitment to the establishment of a socialist Kenya under a democratic workers’ state, the last discussions with him tended to paint a pessimistic future in relation to any immediate intervention by the Left in Kenya.

Adhu’s view was that a new generation of radical Kenyan Leftists will have to emerge to continue with the ideological struggle because the known Left wing Generals had either been absorbed into the capitalist political mainstream, retreated into NGOs, went into political retirement, suffered ideological lethargy, kicked the bucket under different circumstances or betrayed the struggle and started working with the enemy.

In summary, Adhu’s candid view was that the “Mwakenya generation” had basically laid down the tools, either to live quiet lives or to dance with the thieving class of wealth grabbers that they spent the better part of their youthful lives fighting. Despite his pessimism in relation to any possible on-the-ground development of a Left wing movement or Party that could openly challenge the distorted brand of capitalism in Kenya, Adhu was very philosophical about why the Kenyan Left waned soon after the establishment of political pluralism in Kenya in the early 1990s.

The main obstacles against ideological opposition
From the discussions (which sometimes veered towards questioning his position as a former MP under a capitalist and opportunistic party) three key issues stood on the way to the construction of a socialist Movement or Party that could offer a political alternative to capitalism in Kenya. These obstacles, and the circumstances that created them, constitute the fundamental ideological challenges that Adhu’s demise has left behind especially among Kenyans who believe in the overthrow of capitalism and its replacement with a socialist political system of government as the basis of wealth distribution.

The first problem was that following the establishment of a multi-party state in Kenya on July 7th 1990 (aka Saba Saba), Mwakenya, a clandestine Movement whose members are credited with having led the struggle against the one party dictatorship, was nowhere to be seen. At its critical hour, Mwakenya failed to surface from the underground where it had been suppressed (for years by Moi) to transform itself into a formidable political party that could openly challenge KANU and provide a left oriented ideological direction to the masses of the people in the new multi-party dispensation.

Consequently, a plethora of opportunistic political formations crystalized to occupy the opposition space and to fill the gaping void that was created by Mwakenya’s absence from action. Here, political formations like FORD, FORD-Kenya, Ford-People, Ford Asili, Kibaki’s Democratic Party, Mukaru Nganga’s KENDA, George Anyona’s Kenya National Congress and a rag tag of later creations quickly crept on to the scene to take strategic positions within the new opposition as Mwakenya basically disappeared into oblivion.

Known members of Mwakenya whose names continue to dominate the Mwakenya history, political detainees, former political prisoners and other firebrands either remained in their spider holes, continued to propagandize from exile or joined the emergent and mainstream opposition crickets whose pathognomonic feature was ideological bankruptcy. When the dust settled and the first multi-party election was called in December 1992, KANU ended up with no real ideological opposition while millions of Kenyans who viewed Mwakenya as a serious revolutionary force that could play a huge role in Kenya’s political transformation were disappointed when Mwakenya failed to show up in the political market place. What happened? This brings us to the second problem.

Critical failures of Mwakenya
Majority of Mwakenya  members and activists both at home and in exile failed to surface to lead the struggle because the revert of Kenya to a multi-party state happened so quickly that the Movement was taken by surprise. That is, the Movement had not prepared politically for a situation where it would operate under an open multi-party system. The critical failure of top Mwakenya ideologues to fore-see the abrupt revert by Moi to a multi-party system deprived the leadership of the ability to prepare, organize and transform Mwakenya from a virulent underground propaganda group to a viable political party that could compete with other emergent parties in the struggle for power. The situation became even more pathetic when known Mwakenya members started setting up ideologically bankrupt parties, a situation which tended to confuse Mwakenya followers who were expecting a socialist formation to give ideological direction in the struggle to vanquish capitalism. The disorientation of Mwakenya members and the lack of direction was, however, understandable. Why?

The Stalinist regime in the former Soviet Union had just collapsed and this development had a debilitating psychological effect on many Mwakenya leaders and followers who believed that the autocratic and dictatorial Stalinist regime that was running a deformed Workers’ State in the former USSR was Socialist. The problem was that although Mwakenya was basically a Left-leaning Movement (from the point of view of its propaganda material), the leaders appeared not to have studied the various Left wing global tendencies that existed at that time to be able to differentiate between the various brands of socialism in the USSR, Cuba, China, North Korea, Vietnam and Eastern Europe.

Although the impending collapse of the USSR was constantly being predicted by other Left wing tendencies (especially the Trotskyists), the USSR remained the perfect representation of socialism in the eyes of Mwakenya leadership and when it collapsed, the leadership was sent into a downward psychological spiral. The lack of understanding of political events in the former USSR and the subsequent collapse of Stalinist states in Eastern Europe sent top Mwakenya gurus into serious ideological re-thinking, giving them no time to regroup after Saba Saba as opportunists took over the opposition. During closed door discussions, these are issues that appeared to have been well understood by the late Adhu Awiti.

Why Mwakenya Failed to regroup after Saba Saba
While the theoretical background of the collapse of the former Soviet Union could be complex and beyond the scope of this contribution, it would suffice to say that the Mwakenya leadership found itself entrenched in uncertainty after Saba Saba. The collapse of the USSR was a major set-back to the international working class Movement and the failure by Mwakenya leadership to understand the dynamics of the collapse led to a lack of explanation of what had happened.

In the ensuing psychological uncertainty, it was impossible for the leadership to re-constitute itself to deal with the multi-party surprise especially in the face of massive international propaganda in the capitalist world that “socialism had fallen”. Another problem was that Mwakenya leadership was mainly based in exile and when the leadership failed to show up in Kenya, local members became demoralized before resignation took over as multi-party euphoria seeped into the consciousness of millions of Kenyans who viewed this development as the solution to the political, economic and social crisis that faced Kenya. In the absence of Mwakenya, the new opposition politicians clothed in opportunism (the Matibas who had worked with Moi for years) became the new heroes as the real heroes retreated to their dungeons.

From the point of view of Dr. Adhu, what can be celebrated since Saba Saba is progress in the National Democratic Revolution – a revolution for political and democratic rights that never existed during the days of Mwakenya. While progress in the national democratic revolution has moved the struggle forward, it alone cannot resolve the bread and butter issues. The key ideological challenge for those who want to change Kenya is not to support ethnic alliances for the simple sake of removing one capitalist ruling class and replacing it with another. The big challenge is in setting up a political alternative that can clearly show the way out of the current political, economic and social crisis in Kenya.

Although Dr. Adhu is gone, he has left behind a big challenge of picking up the pieces from where Mwakenya left and building a socialist party that can lead workers to power. There is no short-cut to wealth re-distribution apart from the abolition of the outdated profit system and replacing it with a socialist system that can guarantee ugali on the table for every Kenyan, medical care for all Kenyans, free education at all levels, eradication of poverty and the right to self-determination of Kenya as a Nation. Kenyans can honour Adhu Awiti by continuing in his quest for a just, democratic and socialist Kenya where all Kenyans can live together as equal human beings.