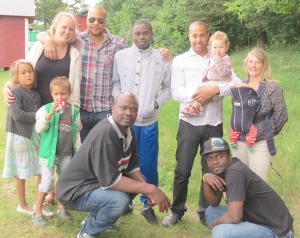 Following the death of Mr. Jared Adiwa, the “Jared Adiwa Committee” would like to thank everybody who contributed money towards the transportation of Jared’s body to Kenya for burial. As the body was flown to Kenya, Jared’s two sons also travelled to Kenya while they were closely followed by Antony Adiwa, Jared’s younger brother, who also travelled to Kenya a few days after the body arrived in Kenya.

The Jared Adiwa Committee would like to inform all those concerned that Jared is now buried in Kenya. This clarification follows unfounded rumours that Jared’s body was still in Stockholm, days after the body was buried.

The Committee would also like to inform the general public that friends and other well-wishers could not have the opportunity to attend a memorial service for Jared because such an exercise could have cost extra money and given the tight budget that the Committee faced, it was decided that the body be transported to Kenya for burial without any extra expenses. The Committee has since apologized to anybody who expected to pay last respect to Jared, arguing that the situation was totally out of control due to economic constraints.

According to Antony Adiwa, Jared’s brother, transportation of Jared’s body cost SEK 58.000. Antony thanked all Kenyans who supported the family, both morally and financially following the demise of Jared Adiwa. Antony is still in Kenya but speaking to KSB before he left for the funeral, he said that he was happy that the mission had been accomplished despite several obstacles. Antony is expected in Stockholm anytime from now.

The Jared Adiwa Committee has kindly requested all those spreading rumours that Jared’s body is still in Stockholm to stop doing so in the interest of the bereaved family. The Committee acknowledges the lack of information about the Jared funeral but at the same time underlines the fact that the information vacuum is no excuse for unfounded rumours spread by unscrupulous and idle individuals.

Following a series of fund raisings, the Kenya-Stockholm rumour mills have been grinding 24 hours to the effect that Jared’s body is still in Stockholm. The problem is that KSB’s staff members have been on holiday during the months of June-July and a lot of news has escaped publication due to limited human resources at KSB’s headquarters. As the summer gets to a close, KSB reporters are trifling back to work and the blog site is expected to reach full “propaganda throttle” by the end of next week. At KSB, we wish to confirm that following his death, Jared Adiwa is safely buried and anybody spreading any rumours to the contrary is an enemy of the people.