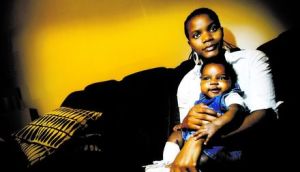 scandal. In an unprecedented, unrivalled and unparalleled moment of revelation, it has emerged that Renah Chentelle is not the daughter of Bryan Arwa and that the story regarding the paternity of Chentelle is steeped in unbridled deceit and open subterfuge.

Jaqueline, the mother of the 23 year-old Bryan who has claimed that he is Chentelle’s father, has called KSB to protest at the use of her son by unscrupulous women in Stockholm for purposes of sorting out their residence permits to settle in Sweden.

Sounding angry, irritated and upset, Bryan’s mother said that it is time for her to speak about the on-going case in her capacity as the mother of Bryan and as a person who should have been the grandmother of Chentelle if Bryan was the biological father of the charming 3 month old baby girl.

“This case has been going on for a long time behind my back. I am calling to say that Bryan is not the father of this child and this should be known to everybody who plans to protest in this case”, she told KSB.

“I knew that Bryan was married when I went to take my personbevis (a certificate of status issued by the Tax office)”, she told KSB. She said that Hellen and her friends are not interested in Bryan but in using him to make papers.

“I brought my son here to give him a better life. He went through his education and when he joined University, these people brought him a baby to adopt. Now, they have brought another baby and trying to use the Swedish system to ruin the life of my son”, she said.

She added that the gang which has masterminded the operation have turned Bryan against her and appealed to KSB to publish the truth about the case for the sake of transparency.

SWEDISH AUTHORITIES INFORMED ABOUT CONCERNS
In a moment of anger, she said that the father of the child is a Nigerian man whom Hellen had been cohabiting with. “I am not opposed to being a grandmother. Let there be a DNA test to prove that my son is the father of the child because what I know is that he is not and this is what Kenyans in Stockholm should understand”, she said.

In the continuing flow of fresh and shocking revelations, Bryan’s mother told KSB that although Hellen’s mother is currently in Sweden, her attempts to meet her and to talk to her about the issue as parents have failed because Hellen and friends have refused to allow for such a meeting.

I was sick on bed when I was told that Bryan was soon going to have a baby under circumstances I did not know”, she said. She added that as soon as the baby was born, the group of friends dumped Bryan who has admitted through KSB that he did not know that Hellen was seeking publicity about the case in Aftonbladet.

“Bryan has been unable to take his exams because of this case. I will not support a scandal of this nature. These people have overpowered my son and something needs to be done”, she said.

She said that Hellen and friends are arguing that Bryan is old enough to take his own decisions but that what they are forgetting is that a child is involved who is not Bryan’s.

“I want to maintain a motherly relationship with my son. Hellen is using the wrong strategy because I was ready to discuss this issue but they have abused me and they don’t even want to see me”, she said.

She attacked those advising Hellen, and vowed to call Aftonbladet Newspaper to put the record straight. She says that she has already informed the Swedish authorities about her concerns and that she will not sit by and watch her sons life ruined by malicious people.

“This is a complete set-up to impose someone’s kid on my son. I challenge Hellen to go for a DNA test and until then, she ought to stop using my son in this way”, she said. She added that it was wrong for Hellen to have rushed to the media single-handedly with such a sensitive issue and that she will have to deal with the consequences. KSB is following the story.