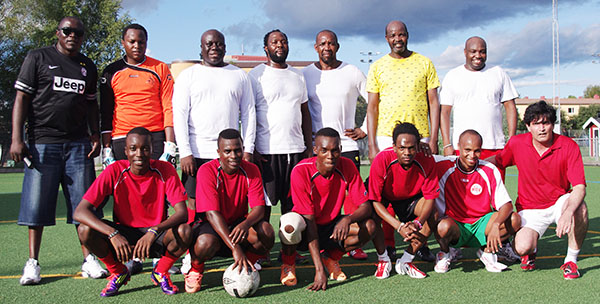 Whichever way you look at it, the Wazee-Vijana Football match held about a week ago exposed a stark reality facing Kenya-Stockholm’s wazees that could have remained expunged from scrutiny. The wazees were thwacked 14-12. However, this defeat, with a margin of only 2 goals, should be deemed “respectable” and a sports critic could be persuaded to credit the wazees for having put up such a formidable resistance against the young Turks who, nevertheless, relaxed their tempo apparently to encourage the wazees. A report on the match can only be complete if the circumstances that led to the defeat of wazee are highlighted.

In the first place, many wazees who were expected at the match did not turn up and an investigation by KSB into the circumstances reveals a mix-up of both tragic and hilarious reasons. The failure of some key players to turn up for the match meant that the team was incomplete while wazees who turned up were demoralized from the start because they immediately understood that they were going in against vijana at a disadvantaged position. Why did wazee go missing at such a crucial match?

The first reason is that Kenya-Stockholm’s wazees are suffering from a series of conditions that makes it impossible for most of them to avail themselves at social functions. According to investigations, the biggest problem is that many wazee are suffering from a series of old-age ailments that have quietly forced them to retire from active social life, leave alone participating in a football match.

Key Examples
For example, Mzee Kobe told KSB that although he could have wanted to play, he is suffering from diabetes and he has to inject himself with insulin at regular intervals to stay alive. Together with his advanced age, running around in a football field chasing a tiny ball with vijana is the last thinkable activity that could come to mind. Consequently, he went missing although he did not want to make his absence clear because he did not want to demoralize other wazees. What about Mzee Dennis Afande?

He did not turn up because he is suffering from high blood pressure. One morning, he was going to work when suddenly he could not breathe. He was in the underground train and as his condition worsened, he managed to get out of the train at some station after which he signaled for a passersby to call an ambulance. When he arrived at St Görans hospital, he was rushed into the acute department and after all was said and done, he got back to his feet but was told that he had to go in for more checkups because his blood pressure was too high. The final diagnosis was that he was suffering from HBP and he was put on medication. When the football match was announced, Mzee Dennis was just entering into rehab to try and stabilize his condition. Under the circumstances, he could not participate in the match although he did not want to bother others with his personal health problems.

That brings us to Mzee Makopoyo who suffered a stroke last December. He was lucky because doctors told him that it was just a “mild stroke”. Following the attack, Mzee Makopoyo has been taking things easy because the stroke shocked him. When asked by KSB why he was shocked, the Mzee said that his thinking was that he was still a “Mzee Kijana” and that when he got the stroke, reality struck to the effect that the “kijana” in his “uzee” was actually an illusion because “vijanas” don’t easily get strokes. He did not show up at the football match because he was still “in meditation”.

If the case of Mzee Makopoyo is unfortunate, the situation facing Mzee Tobby Kaweza is just sad to say the least. He is quietly suffering from cancer of the spleen and this condition has removed him from social life. Makopoyo is on cancer drugs and a strict diet. He has been told that his disease is untreatable so what can be done is to slow the cancer down in order to prolong his life. He is 56 years old but he has had to take an early pension because his condition can no longer allow him to work. The cocktail of drugs has made him weak and participating in a football match with vijana is the last thing he can ever think about. He told KSB that when it comes to sports and other social activities he used to attend, he is a gone case. He is basically counting his days on earth and just begged to be left alone. This brings us to Mzee Alfonse Mashakani, a veteran Kenya-Stockholmer who has also gone underground.

Lost Touch With Reality
When KSB finally got him on the phone and tuned him “to talk”, he was surprised. He did not even know about the football match because, according to him, he has “lost touch with reality”. He is currently at Huddinge hospital after suffering a brain hemorrhage. For several weeks, he has been in comatose although at the time of talking to him, he was heading to rehab within the hospital. He told KSB that as a result of the stroke, he was partially paralyzed and that his greatest priority was to regain his health and evaluate what was left of him as he entered the sun-set of his life on earth. This is the sad reality that the football match revealed. Many of Kenya-Stockholm’s wazees are slowly wasting away as a result of diseases. Mzee Mashakani theorized that he suspected that his condition was a consequence of “over-working” and warned fellow Kenyans to take a break in their lives as much as possible to relax and to exercise.

Romantic
As for Mzee Timbuktu, his absence from the match was not due to sickness. He had just hooked up with a Swedish sweetheart and that week-end was critical because he had fixed a date which he was not gonna miss because of some football match that had just popped up. He told KSB that after he divorced his Kenyan wife, he has been hunting for some white creature “to keep him busy” and it was not until recently that he hit the jackpot. He landed a divorced Swedish woman (almost of his age) and that for now, football can wait! What this means is that the match was lost, not because all wazees are sick but because there are others breaking new grounds. However, the next case of Mzee Dreams Kayole is unique.

He had planned to play on the material day but then a domestic crisis cropped up. He has been quarreling a lot with his long-standing Kenyan wife and he told KSB that chances are that they will soon be splitting up. When he told the wife that he was planning to play for the wazee team, the wifie took advantage of the situation and claimed that one problem she has with him is that he has wrong priorities. According to the wifie, instead of staying at home to be with her, he was planning “an outing” at some field in the name of football. A quarrel ensured and punde si punde, the mzee’s pro-football mood was totally messed up. He took a kinyuaji to cool down tempers but by the time he was calm, it was too late because the match had ended. He failed to show up.

Mountain of Flesh
As for Mzee Sarakasi, the explanation was hilarious. He is single and on Friday, a day before the match, he had been to some African reggae club. As the club was closing down and guests were sipping their last drops, something magical happened. Just from nowhere, a fat-assed, mountain-breasted, chubby faced and “meaty” white Swedish blond-haired and gigantic lassie in her forties zoomed around and kissed him right on the lips. Mzee Sarakasi said that he was genuinely stunned. The enormous size of the woman’s “fundamentals” is exactly what turns him on and he associated the whole surprise with “a manner from heaven”. Before he could say “bwaii!!”, the lady said that she liked him “so match” and that she has been watching him throughout the night.

A conversation started and as he begun to translate the romantic implications of the abrupt encounter, the lady asked him if he could follow her home for “an extension” of the party. Interestingly, the lady lived just around the corner, a walking distance. Sarakasi had planned to show up for the match but unfortunately, by saa saba mchana, the new couple was still in bed! When he made a calculation of the time and what he stood to gain from the football match as compared to the huge white flesh he was wrapped into, he decided not to mention anything about the match. He decided to consolidate the new find, dump the match and see how things developed. Mzee Sarakasi therefore went missing.

The wazee who attended the match beat all odds to be there. Despite their waning stamina and other circumstances, they are still fit and can run in the field. Kudos to these wazees! I will be talking about the vijana in the next installment.