Martin Ngatia: Political Education of Kenyans is Part of Struggle 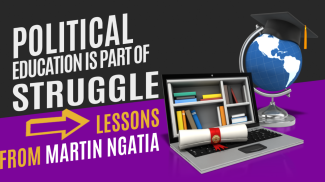 In revolutionary movements the world over, political education has always been at the heart of struggle. In the battle-field, there are foot-soldiers, commanders, military strategists, politicians, diplomats, intelligence gatherers, cooks, medical battalions and a host of other cadres, all working in unison to win the battle.

In revolutionary politics, political education is also very much present especially within the leadership and advanced elements of the movement leading the masses into a power take-over. An informed and educated leadership is likely to speed up the revolutionary process because armed with knowledge about the tasks and tactics of the movement, they can be able to educate others and create hundreds of revolutionary leaders in the process of struggle.

Revolution will not happen by opportunists and other reactionaries shouting the word “revolution” on the campaign platform once every five years. It will only happen if a group of Kenyans seeking revolution team up with like-minded Kenyans to organize the revolution.

Revolutionaries seek to convince the masses about the need for revolution then proceed to show how it can be organized before demonstrating the expected results after the revolution. The whole process is the plan or in political terms, “revolutionary theory”.

For the advanced layers of the revolutionary movement, political education within the context of revolution can be very academic. But for the oppressed masses simply seeking a transformation of their miserable lives, the revolutionary content being imparted has to be simple and within their comprehension.

In this video, Chairman Martin Ngatia simplifies political education in a way that raises political consciousness without the lesson baring the hall-marks of a lecture in a university lecture-hall.

For example, chairman Ngatia gives a viable political alternative to the problem of landlessness and land-grabbing of public land in Kenya. The solution KRA is putting forward is nationalization of all land in Kenya as the basis of land re-distribution.

If the country called “Kenya” is a big land-mass, then it follows that every Kenyan should have a piece of it or access to land. If land ownership is to continue on the basis of land purchase, it will reach a time when no ordinary Kenyan will be able to own land.

At the moment, the ordinary worker cannot own land so it follows that anyone without a job will never be able to own land. This is the population that is on the rise at an annual rate of half million Kenyans. They join millions of other Kenyans who have been on the statistics of landlessness for decades and who have no hope of ever owning land because of poverty. On a long-term, the land relations will have to change and under the capitalist system of government, there is no solution.

In Western democracies, the issue of landlessness was resolved long time ago through nationalizations. The details are intricate and might need further explanations but the bottom line is that there is no justification why a single individual who was born without land and who will die and leave behind land should own thousands of acres of land when millions are landless. The matter becomes even more grave if the land is public land grabbed through high positions in government then developed using stolen public funds.

Nationalization does not automatically mean confiscation. It simply means state ownership of all land in the country. The policy of nationalization gives the state authority to resettle any landless citizen as opposed to the current set-up where without money, any Kenyan will remain landless throughout their lives.

Why should you be called a Kenyan when you do not have the right to build a house anywhere in Kenya unless you have purchased the land from some one who could be making profit by selling part of the country? Think about it. A socialist alternative of nationalization is the permanent solution. If you have a better solution, let us know.