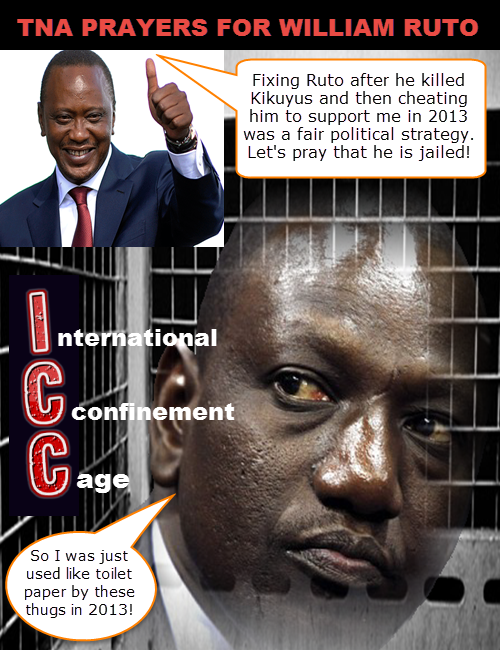 Uhuru Kenyatta and William Ruto formed a political coalition to protect themselves from trials at the International Criminal Court (ICC) which had charged them with serious crimes against humanity, for allegedly participating in the post-election violence (PEV) in 2007-08. The two have no record of fighting for anything to liberate Kenyans. For instance, William Ruto opposed the Constitutional referendum in 2010, yet in 2013, he swore to defend it as Deputy President. Uhuru too, has already used his position as President to abuse sections of the new Constitution, in attempts to revive the imperial presidency of his father’s reign of terror.

So far, Uhuru and Ruto’s Jubilee Government is associated with corruption, wastage of public funds, tribalism, nepotism, cronyism and lack of patriotism. Uhuru’s massive wealth is as a result of his parents’ alleged looting of Government coffers, including illegal poaching and selling of elephant tusks by his mother, Mama Ngina. Ruto began as a small-time poultry farmer, yet he is now a billionaire whose wealth-building is linked to massive financial scandals as a politician. Where were Uhuru and Ruto during the clamor for multiparty politics in the early 1990s? Uhuru joined four young Kenyans to demand for more political space during Dictator Moi’s brutal presidency, and supported then-presidential candidate Kenneth Matiba, in 1992. Nonetheless, he was a member of Moi’s ruling party, the Kenya African National Union (KANU), during his first attempt to become a Member of Parliament (MP) in 1997.

Ruto on the other hand, was Organizing Secretary of the dreaded Youth for KANU ’92 (YK92), which was a group formed to support Moi in the 1992 presidential election. According to online information, YK92 “was widely accused of being complicit in ethnic violence directed at Kikuyu residents in southern and central parts of Rift Valley Province up to and after that elections under the guise of majimbo.” Uhuru and Ruto’s political background is well-cemented in the ideals of Kenya’s former ruling party, KANU, which was essentially dictatorial and corrupt, under the leadership of Jomo Kenyatta and Daniel arap Moi.

The recent revelation by Gatundu South MP Moses Kuria that he was part of a team which ‘fixed’ William Ruto at the ICC, was earth-shattering and has revived the old Kikuyu-Kalenjin political distrust, which got many Kikuyus evicted and killed by Moi’s brutal regime towards the presidential elections in 1992 and 1997. The PEV of 2007-08 was worse and though other non-Kalenjins were also victimized, it is the Kikuyu community (mostly in Kalenjin’s Rift Valley) that lost the highest number of lives.

ICC witness statements
Uhuru and Ruto did not spend time to reconcile the Kikuyu and Kalenjin communities after the PEV. Instead, Ruto reportedly spent millions of Kenya Shillings buying off most of the former Kalenjin ministers and politicians away from Raila Odinga’s Orange Democratic Party (ODM). Those who did not follow him to his United Republican Party (URP) lost their parliamentary seats in the 2013 General Election.

Ruto’s case at the ICC has not changed and still reads: “Mr Ruto is accused of being criminally responsible as an indirect co-perpetrator pursuant to article 25(3)(a) of the Rome Statute for the crimes against humanity of: murder (article 7(l)(a)); deportation or forcible transfer of population (article 7(l)(d)); and persecution (article 7(l)(h)).” In response to the claims of Moses Kuria – the loose cannon of Jubilee, ODM drafted a 10-point statement indicating that: “We are here to restate the position we took this week that President Uhuru Kenyatta was fully aware of and funded the procuring of witnesses against his Deputy William Ruto. We also restate that contrary to what Jubilee is saying, Uhuru Kenyatta has done nothing to make sure the case facing Ruto, ends in Ruto’s favour.”

Pages 124-125 in the ICC Pre-Trial Chamber document for Ruto’s case filed on January 23, 2012 states: “339: In particular, Witness 8 recollected that Mr. Ruto said at the first planning meeting that the agenda was “to plan the war” and sensitize people for the plan. According to the same witness, in a meeting that took place on 15 April 2007 as well as in two subsequent meetings, Mr. Ruto and other members of the organisation said that they would “expel” or “evict” the Kikuyu, Kamba, and Kisii and Mr. Ruto took an oath “to kill [these] tribes mercilessly”. The witness describes Mr. Ruto’s commitment to eradicate the PNU supporters at any cost during an ODM rally in Kipkarren on 6 December 2007. Based on Witness 8’s testimony, Mr. Ruto said that “in case Kibaki wins the election the youths should barricade the streets, destroy the property and kill the Kikuyus”. The witness also testified that in a meeting held at Mr. Ruto’s house on 14 December 2007, Mr. Ruto made the crowd promise to kill the Kikuyu, Kamba, and Kisii.

340: This information is supported by the testimony of Witness 2 who quotes Mr. Ruto during a ceremony saying that “Kikuyu must be evicted from the Rift Valley”. The witness said that Mr. Ruto made a statement in the tribal language, which means “[l]et us remove the Kikuyu from our land, the Rift Valley”. In the witness’ comprehension, Mr. Ruto meant to get them out by using force which leads to death, destroying their houses “by arson to prevent them from coming back”.”

Kikuyu and Kalenjin leaders in Jubilee are at pains to counter ODM’s and particularly Raila’s statements which detail how Uhuru Kenyatta fixed Ruto. They are also aware that the wider Kalenjin community knows Ruto was fixed by Kikuyus who worked in Kibaki’s government and one of them, Nancy Gitau, is currently Uhuru’s chief advisor. Therefore, who fixed who and for what reason should not be Jubilee’s worry, since no matter how many prayer rallies and propaganda they spin against Raila Odinga, ICC witness testimonies against Ruto are so damning, only his defence team shall hopefully save him from being jailed in The Hague.