William Ruto Should Carry His Own Cross at the ICC 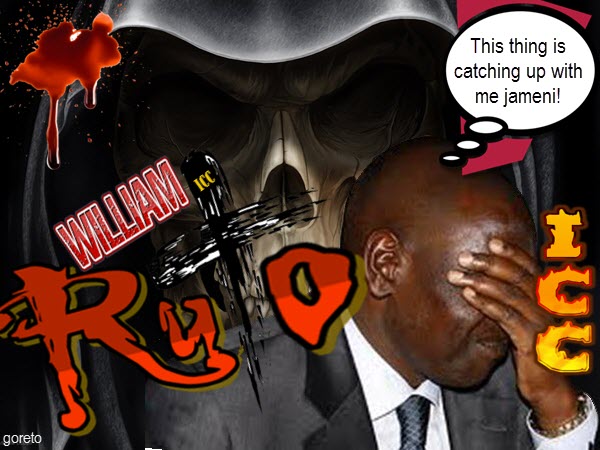 The Jubilee government in Kenya has begun a new round of protests against the International Criminal Court (ICC) in The Hague, after the recent ruling that it would use recanted witness statements as evidence in the case of accused Kenyan Deputy President, William Ruto. The Kenyan mission to the United Nations has written a protest note to the ICC and the Assembly of States Parties, to express its disappointment in this new twist.

Meanwhile, members of Ruto’s United Republican Party (URP) which is dominated by his Kalenjin ethnic group, have begun their seasonal circus shows aka “prayer meetings”, calling for the freedom of their political kingpin from the yokes of the ICC. They have claimed too that since Uhuru Kenyatta’s case was dropped by the Court in December 2014, their main Jubilee coalition partner The National Alliance (TNA), dominated by Uhuru’s Kikuyu ethnic group, is not providing the necessary support to have Ruto released.

It is important to note that Uhuru Kenyatta’s case was not terminated because of his government’s earlier campaigns and protests against the ICC, which comprised “prayers, shuttle diplomacy, protest notes, appeals to the African Union to terminate it, and so forth. It was because the ICC Office of the Prosecutor was asked by the Court’s judges to produce evidence demonstrating that his “alleged criminal responsibility can be proven beyond reasonable doubt” or withdraw the case. The ICC Chief Prosecutor, Fatou Bensouda, had to withdraw it since the Kenyan government had refused to avail vital documents showing Uhuru’s phone and bank records from the post-election (PEV) period in 2007-08. Although the Jubilee government claimed it had cooperated with the ICC as required, the Court accused Kenyatta (in February 2014) of “pure obstructionism” . According to the Prosecutor’s office, “The Kenyan Government’s non-compliance has not only compromised the Prosecution’s ability to thoroughly investigate the charges, but has ultimately impinged upon the Chamber’s ability to fulfill its mandate.”

Extra judicial killings, bribes and disappearance of witnesses
The Prosecutor’s Office had requested for more time to build Uhuru’s case when it suspected witnesses were being killed, intimidated or bribed to recant their evidence against him. According to the Committee to Protect Journalists (CPJ) research and numerous media reports, since the ICC cases began, witnesses have been killed and some journalists have disappeared or fled the country. On April 30, 2015 John Kituyi, editor and publisher of the privately-owned Mirror Weekly newspaper based in Eldoret, was murdered by unknown assailants. His death came just a week after the newspaper ran a story titled: “Now ICC Plot to Lockup Ruto”. The CPJ claimed that three journalists and a family member believed Kituyi was murdered because of the story. See: “Kenyan editor murdered by unknown assailants in Eldoret town”

Eldoret-based Catholic Priest Gabriel Dolan’s piece in the Daily Nation newspaper on August 28, 2015 titled: “Extrajudicial Killings Cause for Concern”, clearly revealed the danger faced by ICC witnesses in Kenya. “The failure of state machinery to investigate the cases of John Kituyi, Jonah Bureti, Meshack Yebei and many others tells its own story of complicity and cover up.”

URP politicians are still peddling the passé lie that former Prime Minister Raila Odinga had “sold” Ruto to the ICC, yet last year, Ruto’s lawyer Karim Khan, claimed (to the shock of the Kalenjin community) that some of those who “fixed” him, were senior government officers in Uhuru’s government. They include former Interior Principal Secretary Mutea Iringo, and the President’s advisor on political affairs, Nancy Gitau. A section of the media reported that: “The two were alleged to have funded the witness protection programme, and coordinated recruitment of witnesses to provide evidence to the Waki Commission to implicate Mr Ruto and the Orange Democratic Movement (ODM) party.”

Some URP members also falsely believe that if Ruto runs as president in 2017 with Uhuru as his deputy, he will be safe because Kenyan presidents have immunity against prosecution. However, they have not considered that this is not applicable in international law, and especially within the Rome Statute of the ICC. William Ruto should carry his own cross at the ICC instead of his crybaby attitude, which might stoke  political tensions. He is accused as an individual and he should stop seeking sympathy by posing as though Kenya as a country is on trial at the ICC.