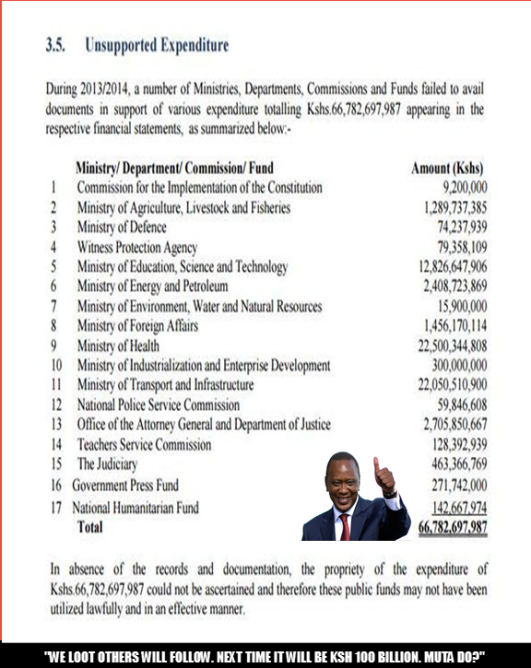 Just as President Barack Obama’s Air Force One was taking off from Jomo Kenyatta International Airport to Ethiopia on Sunday evening, Mr. Edward Ouko, the Auditor General, was releasing a damning Report which indicated that during the 2013/2014 financial year, members of the Jubilee government looted over Ksh 66 billion from the Treasury.

This latest Report further underlines the extent to which Jubilee government is looting the Kenyan economy.  After coming to power through a rigged election, The administration of Uhuru Kenyatta has specialized in stealing taxpayer’s money.

Using the principle of “It’s our turn to eat”, there appears to be no limit to corruption. The anti-corruption bodies in place to check corruption (past and present) appears to be toothless. Regardless of propaganda from State House, the agenda of Jubilee government is to steal from Kenyans because those in charge know that they are responsible to nobody but themselves.

The Report by the Auditor General is just the latest evidence in a series of multiple exposures which could have ignited any responsible government to take immediate action by rounding up all suspects, hand-cuffing them, dumping them in custody, trying them in a Court of law and either jailing them for life or hanging them with a guitar wire at Uhuru Park if found guilty.

In the case of Jubilee, no action can be taken against the thieves because the President of the Republic is not just a documented thief of public resources but also sanctions stealing of public funds by his officers. The best action the President is known to take in the face of corruption is to send his corrupt officials on a brief luxurious vacation (aka stepping aside) before they are reinstated after being given a new “clean bill of health” to continue looting the economy.

Take it or leave it: The “House of Mumbi” is leading Kenya astray and the faster Kenyans begun a serious re-thinking of how to recover their country, the more it will be possible to reconstruct the country. For now, thieves and robbers are in charge at State House, Central Bank, Treasury, Parliament, Kenya Revenue Authority, Office of President, Office of Vice President, Judiciary and any key government institution imaginable. It is time for a democratic socialist revolution to abolish the rotten capitalist system of government the thieves have been using to steal from Kenyans since the days of Mzee Jomo Kenyatta as Kenyans suffer in their millions.

The Kenya Red Alliance (KRA) is ready to lead this revolution. Let us all join hands under the wise leadership of KRA to rid the country of the blood-sucking Mafia cartels that have been milking the country dry as millions of Kenyans die of starvation, treatable diseases and a host of preventable causes. For further info about the Revolution, keep an eye on kenyaredalliance.com.