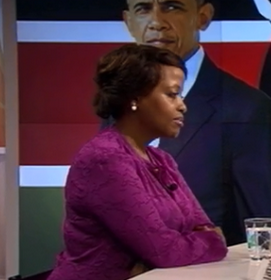 Now that President Barack Obama’s long awaited visit to Kenya is effectively part of history, it is perhaps time to tackle some of the side issues that surrounded his visit.  Just hours before Obama landed in Kenya, Nancy Mungai, a Kenya-Stockholmer, suddenly surfaced on Swedish national TV 1 to present a plethora of lop-sided views about the political and economic situation in Kenya.

Nancy, who conveniently positioned herself as an “Advisor” of Swedish companies seeking to invest in Kenya, did not just present a distorted picture of Kenya but also veered haphazardly into a ludicrous pontification on the impact of Obama’s visit to Kenya. In view of the incongruent nature of Nancy’s views, and given the warped perception these views might impinge on ignorant layers of the national white Swedish population who may have bought her analysis, it is paramount that the record be set straight.

According to Nancy, Kenya is doing well economically through investment in IT and other services. Nancy told viewers that Kenya’s economic boom has led to a rise in the middle class. She advised that the US can help boost Kenya’s economy by investing more in trade and industry.

External debt
The Kenyan economy cannot be said to have grown when the reality on the ground indictates a steady decline in living standards of huge sections of the population. Currently, 13 million able-bodied Kenyans are out of work while every year, half a million unemployed youths pour into the job market from various learning institutions. There is no indication that the country’s GDP per capita is growing. Evidence on the ground indicates that the rate of inflation is so high that millions of Kenyans are unable to afford a square meal.

Instead of creating jobs, the government has actually been retrenching workers while civil servants are constantly on strike or threatening strike actions because of starvation wages. How can the economy be growing when the Uhuru regime continues to maintain a ban on Civil servant employment that was instituted by former dictator Daniel arap Moi? If the economy is growing, why is the government complaining about the national wage bill?

When a country’s economy is on the rise, its external debt should be on the decline. In the case of Kenya, the country’s external debt increased from Ksh 1.326 trillion in April 2015 to Ksh 1.381 trillion in May 2015 (Central Bank statistics). At the national level, the implication is that the average Kenyan is sliding deeper into debt and poverty. Currently, 43% of Kenya’s GDP (almost half) goes into servicing the country’s external debt. According to a modest World Bank’s analysis (April 2015), talk about Kenya’s economic growth could be immature because “External demand for exports is also sluggish and low growth of production for exports is widening the current account deficit. Also, the share of the manufacturing sector to GDP has remained stagnant in recent years, with low overall productivity and large productivity differences in firms across subsectors due to lack of competition”. With rising poverty, high unemployment, declining living standards, a growing external debt and a big chunk of the country’s GDP being swallowed by external debt serving, where did Nancy Mungai peg her economic growth theory?

A Middle class sliding into underclass
It is fashionable to talk about a “rising middle class” in Kenya. What usually goes missing during such analysis is the corresponding rise in the rural and urban underclass unable to fend for itself after the crisis of capitalism reduced large swaths of the population to unofficial beggars. On the contrary, with stagnant wages occasioned by a declining economy and a freeze on employment by the government, the so called middle class in Kenya is basically struggling to prevent itself from sliding into underclass by constantly trying to “go into business” with serious capital constraints. Nancy’s view that the Kenyan middle class is on the rise is pure fiction and based on a mantra created by Jubilee propagandists to prop up a regime in crisis.

In her attempt to theorize on the issue of terrorism, Nancy said that the issue of terror is global and not just a Kenyan problem. She actually hoped that Obama would assist in fighting terrorism. It is unfortunate that at the level of “Advisor” of Swedish companies seeking to invest in Kenya, Nancy does not understand that the Shabbab terror activities in Kenya are linked to the government’s unsolicited and aggressive war in Somalia. Kenya does not need Obama to help fight terrorism across the country. What the government needs to do is to withdraw KDF forces from Somalia, stop ethnic profiling of Kenyans of Somali origin and accord every Kenyan all rights as citizens of the Republic.

Nancy: An extension of Jubilee propaganda machine
Instead of rendering a balanced analysis of the Kenyan situation and painting the correct picture of the Jubilee government, Nancy emerged more as a well-oiled Jubilee mouth-piece than an impartial commentator on Kenyan politics. What is more?

She totally ignored commenting on: rampant corruption of the Jubilee government; massive tribalism on the appointment of public servants; failure by the Jubilee government to honor its most basic election promises; violation of the Constitution by the government; frustration of devolution; political assassinations especially of Muslim clerics; failure of the Jubilee government to create jobs for the youth; human rights violations while she also failed to recognize Uhuru Kenyatta’s inability to govern. Nancy even failed to point out the issue of insecurity across the country and dramatic rise in crime rate by idle youths after promises of jobs failed to materialize. In fact, Johan, a Swedish journalist based in Nairobi, appeared to have been more knowledgeable about Kenya than Nancy.

After being accorded a significant opportunity by a Swedish mainstream media outlet to throw light ahead of Obama’s visit to Kenya, and as a Kenyan in diaspora, it is regrettable that Nancy wasted the grand opportunity. Instead of using it to educate the Swedish population about the real situation in Kenya, she converted herself into an extension of the vicious Jubilee propaganda machine desperately trying to paint Uhuru Kenyatta’s regime as the best regime Kenya has ever had when evidence shows that Jubilee is not just a total flop but a living catastrophe for the Kenyan people after this government came to power through a rigged election.