Why Should Western Imperialism Want Uhuru Locked at the ICC? 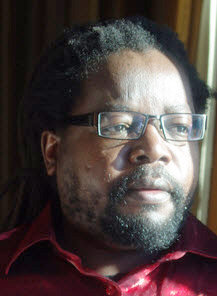 Okoth Osewe: Kamwana may not be out of the woods yet!

In the past few weeks, there has been a lot of celebration in the Jubilee camp following the perceived collapse of Uhuru Kenyatta’s ICC case. In the Kenyan media, Jubilee minions have flooded every pro-Jubilee news channel with both twisted facts and unrelenting propaganda to the effect that eventually, Uhuru Muigai Kenyatta “has been found innocent” because the withdrawal of witnesses has rendered the Kenyatta case untenable.

In the midst of the celebrations, certain key questions have evaded requisite publicity or mention in the commentaries. In fact, the hoopla has somehow seen the pro-ICC enthusiasts almost subdued by the “Uhuru has no case to answer” fanatics crawling online. It is in this context that the key questions alluded to could help widen the current and narrow perspective being aggressively peddled by Jubilee supporters.

To begin with, Jubilee supporters have effectively converted a postponement of the Kenyatta case into a “collapse” of the case for propaganda reasons. When ICC Prosecutor, Fatou Bensouda,  made the dramatic announcement that led to an outbreak of celebrations in the Jubilee camp following withdrawal of two ICC witnesses, she stated that “Having carefully considered my evidence and the impact of the two withdrawals, I have come to the conclusion that currently the case against Mr Kenyatta does not satisfy the high evidentiary standards required at trial.” While this statement obviously suggested that Bensouda’s case was weakening, it was in no way an explicit admission that the case against Kenyatta had collapsed. In celebrating this statement, what the Jubilee fanatics left out of the equation is the connection between the witness withdrawal and alleged bribery of witnesses by government agents to entice them to withdraw from the case.

When Bensouda further moved to postpone Uhuru Kenyatta’s case from 5th February 2014 to “indefinitely”, many keen observers must have been surprised when instead of the case crumbling into pieces, it was the Nigerian born ICC Judge, Chile Eboe-Osuji who threw in the towel by tendering his resignation without notice. Although this important development was largely given lurkwarm treatment by the pro-Jubilee media in Kenya, the resignation of Eboe-Osuji (hot on the heels of the Bensouda announcements) suggested that something must have been terribly wrong at the ICC headquarters.

Judge Eboe-Osuji resigned without any credible explanation although it is highly probable that his resignation may have been prompted by pressure from imperialist quarters. Why? In an article entitled “Kenya: Who is fixing the Ocampo Six” published here at KSB on March 13th 2011, I argued that it was not Raila Odinga but western imperialism that wanted Uhuruto locked in at the ICC. Almost two years later, it is official that Raila had nothing to do with the “ICC fixes” while western imperialism continues to be a key suspect. After his resignation without any good explanation, it is possible that Western powers (who are the real forces behind ICC) may have forced Eboe-Osuji’s resignation because of probable fears that he may have been compromised by Uhuruto to kill the cases. While Bensouda was constantly complaining of witness bribery, witness intimidation and lack of cooperation by the Kenyan government on the collection of evidence, Eboe-Osuji was very reluctant in taking any drastic action against the Uhuruto government. Could he have been compromised?

Although the indefinite adjournment of Uhuru’s case by Bensouda precipitated celebration in the Uhuru camp, my evolving hypothesis is that Bensouda may have been buying time to allow ICC to get rid of Judge Eboe-Osui ahead of a major regroupment by anti-Uhuru forces to nail the son of Jomo once and for all. With the appointment of Judge Geoffrey A. Henderson to handle the case, celebration by Jubilee sycophants may be short lived.

Imperialism never forgives or forgets
At first, the perception after the Bensouda announcements was that imperialist powers (especially Britain and the United States) had eventually decided to work with Uhuru Kenyatta. It is notable that this perception has eventually waned because since the Bensouda announcements, there has been no major political development that could suggest that Imperialism is warming up to Kenyatta or his government while the cold war between Jubilee and the West continues.

Western powers are not interested in letting Kenyatta win the ICC battle because then, the institution known as ICC will be dead and buried, a ceremony the West does not want to witness at a time when they have just provoked fresh strife in North Africa (Egypt and Libya) and sparked new wars in the Middle East especially in Syria.

Secondly, Imperialism never forgives or forgets while they are also known to abandon or conveniently kill old friends who become politically useless. They cheated Mohammed Ghaddafi with fake friendship then sent bombs to weaken his government before he was killed by Western supported bandits. They befriended Saddam Hussein, fixed him to fight a protracted proxy war with Iran, supplied him with chemical weapons, overthrew his government (at the pretext of having chemical weapons) then released him to be hanged by his own people. They built and used Osama Bin Laden during the Afghan-Soviet war, started hunting him down after Bin Laden accomplished the mission then later tracked him down and allegedly assassinated him. After using Manuel Noriega, former Panamanian dictator, they invaded his country in 1989 Iraq-style, captured him then later locked him behind bars for years. In fact, Imperialism abandoned Hosni Mubarak (one of their best friends in Africa) to be overthrown, arrested and jailed when Mubarak became politically useless during the so called Arab spring. What has Uhuru done to warrant revenge by Western powers who are in charge of ICC?

Kenyatta is leading an unpopular government rigged to power by the military and the Intelligence to help him fight his ICC case. Kenyatta is a suspected war criminal whom no Western leader is comfortable with and this is why he has not been invited to any Western capital almost a year after coming to office. Because of the “suspected criminal” status of Uhuruto, the West is maintaining its Embassies in Kenya only for strategic reasons.  Late last year at public platforms, and as part of his anti-ICC campaign, Kenyatta went on an empty anti-imperialist rhetoric only akin to the jingoistic outbursts of the late dictator Idi Amin Dada during his heydays in Uganda. If he outmaneuvers the West at the ICC (which they own), Uhuru will qualify to be crowned the “Mugabe of East Africa”, a coronation the West does not want to witness in their very playground called Kenya. For these reasons, and in the eyes of western imperialism, Uhuru must go, an analysis which Uhuru’s advisors, Intelligence and sycophants around him are not giving him. Instead, the Bensouda announcements are being used by his cohorts to create illusions that he is finally wriggling his way out of the ICC.

Since it is an open secret that the West controls ICC, the indefinite postponement of the Uhuru case (in juxtaposition to Eboe-Osujie’s resignation) together with the failure of Uhuru to get any State visit invitation to any Western capital should be a pointer that the owners of ICC may have retreated to the drawing board. Be that as it may, Uhuru may be facing insurmountable challenges in the coming days and this is why despite the “victories” being peddled in the media, Uhuru Kenyatta continues to be a physically worried man.

ICC and past imprisonments without evidence
While Uhuru’s supporters are harping on the lack of evidence as the basis of arguments that Uhuru has no case to answer, the situation might be completely different if the West is interested in getting him nailed. This is because the West does not need any evidence to nail anybody at the ICC. Charles Taylor, former Liberian President, has been locked in for 50 years without any credible evidence to prove his involvement in war crimes. Likewise, the late Slobodan Milosovic was rounded up and locked in The Hague without a shred of evidence before he died in custody. Laurent Gbagbo, former President of Ivory Coast, was carted away to ICC without a single evidence on war crimes and is currently awaiting trial. What the West needs to lock Uhuru Kenyatta at The ICC is a political motive which already exists in various forms. This is the key point many Uhuru’s supporters are missing.

Since he was rigged by the military to assume the Presidency (this is why Western powers have refused to recognize him), Uhuru has basically been anti-Western in his newly found radical anti-ICC posture. While the son of Jomo has been employing the whole government machinery to openly frustrate the ICC process through witness intimidation, witness bribery, refusal to allow ICC investigations in Kenya and using State funds to campaign against ICC at the African Union headquarters, he has also been selling Kenya to the Chinese who have scooped numerous lucrative government contracts through corruption, much to the chagrin of the West.

Under the circumstances, the Uhuru Presidency is not in the interest of Western imperialism which has been controlling Kenya since flag independence. The West views Uhuru’s Presidency as benefitting their Chinese rivals and this is worrying the West because Nairobi has been the center of imperialist operations in East and Central Africa through to the Horn of Africa. Moreno Ocampo (who said that the Uhuruto cases will serve as an example to the whole world) has openly said that the main Western agenda with the ICC project was to lock Uhuruto at the ICC. While the strategy may have faultered, the focus of this agenda may still be in place and the more the Kenyatta supporters celebrate, the more the Kenyatta enemies may be fine-tuning their new strategy. This is not to suggest that Kenya ought to be under imperialist control. It is to underline the oblivious forces that may cut Uhuru’s Presidency at short notice and to alert shibboleths celebrating Uhuru’s victory that kamwana may not yet be out of the woods.

Apart from Uhuru’s tribulations, William Ruto, the Deputy President, is in an even worse position because no one is celebrating the imminent dropping of his case. No high caliber witnesses are withdrawing while the Jubilee government is not saying anything about his fate. What this means theoretically is that Ruto will definitely be locked in even if Uhuru escapes.

Despite the silence on Ruto’s tribulations, what is known is that Ruto has, of late, been complaining that Uhuru’s men currently occupying top positions in government are the very people who “fixed” him at the ICC. Together with the crisis facing the Jubilee government (which is another story), Kenyans are in for hard times ahead while the country’s fragile leadership has reason to complain about constant headache. In the meantime, Kenyans will continue to pay the real price as the country lurches from one crisis to another.