An AU Absurdity: African Leaders Promote Impunity for Themselves 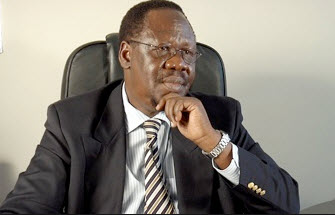 At the recently concluded AU special summit, the African rulers resolved that no sitting head of state must stand trial at the ICC regardless of how horrendous crimes the accused is charged with.

Thus, with many serious issues facing Africa the AU considers it a priority to protect its members from accountability, individual criminal responsibility, and ultimately promote impunity.

It is the duty of the UN Security Council to encourage the application of, and respect for, the rule of law. It must be seen to be on the right side of history.

The AU and African heads of state must be denied any opportunity to promote impunity and to continue to remain unaccountable to the people of Africa.

At the recently concluded African Union (AU) special summit in Addis Ababa, the African rulers resolved that no sitting head of state must stand trial at the International Criminal Court (ICC) regardless of the horrendous nature of the crime the accused is charged with.

The AU further resolved to request the Security Council to defer the prosecution of President Kenyatta of Kenya, and his deputy William Ruto for one year.

It is interesting that with many serious issues facing Africa, particularly armed conflicts, terrorism, gross violations of human rights, corruptions, and many more, the AU considers it a priority to protect its members from accountability, individual criminal responsibility, and ultimately promote impunity.

At some point, the interests of victims and accused with respect to a fair, public and speedy trial coincides.  This is one important reason why the Security Council must allow the trial to proceed. It is in that context that Article 16, with all its flaws must be appreciated.

Article 16 of the ICC Statute authorizes the UN Security Council to defer investigations or prosecution, at any stage of the proceedings, for a period of 12 months, in a resolution adopted under Chapter VII of the UN Charter. The Security Council may renew the deferral under the same conditions after every 12 months. The deferral may be authorized for an indefinite period, but each time the renewal is for a 12-month period.

The impact of the UN Security Council deferral is imprecise but serious nonetheless. It is not expressly provided for in the ICC Statute as to what the precise consequences of a deferral on the on-going cases are. The issues for consideration to determine the impact of deferral of a case includes whether a deferral may impact on cooperation between states and the Prosecutor.

There are no precedent or previous decisions of the Security Council on deferral of cases generally and deferral of on-going cases in particular to inform us on possible consequences of such action.

It is reasonable to infer that UN Security Council deferral, for whatever period, will undermine on-going and any future investigations or prosecutions after the deferral is lifted. Fundamentally it will erode or destroy trust between the Prosecutor and witnesses on the one hand, and the Prosecutor and Victims who are also witnesses, on the other.

A deferral of a case will likely benefit accused persons. It will protect accused persons from prosecution, assist them in avoiding accountability for their crimes and denies justice, compensation and possible closure to victims. Overall, a deferral of any case tends to promote impunity and to undermine the rule of law.

The other challenges with deferral of a case already before the ICC are the trigger mechanism. Article 16 is triggered only after the applicants have satisfied the Security Council that continued investigations and prosecutions of President Kenyatta and his deputy is a threat to international peace and security as defined in article 39 of Chapter VII of the UN Charter.

The burden of proof is on the applicant.

Thus, it must be persuasively demonstrated by AU and Kenya that the mere presence of President Kenyatta and his deputy at The Hague for trial will constitute a threat to international peace and security, namely, a threat to the peace, a breach of the peace or an act of aggression as stipulated in article 39 of the UN Charter.

On the other hand, Deputy President Ruto has already travelled to The Hague several times and his presence at The Hague did not constitute a threat to international peace and security.

Additionally, is there any empirical evidence that once the Security Council authorizes President Kenyatta’s deferral, not prosecuting him at The Hague would necessarily function to maintain or restore international peace and security as stipulated in article 39 of the UN Charter?

In the course of its deliberation, the primary issue the Security Council will have to address is whether the joint AU/Kenya request meets the threshold of article 39 of Chapter VII of the UN Charter?  If the answer is affirmative, then the case will be deferred.

However, there are a number of reasons why the Security Council deferral of the case may be problematic. First, the request does not appear to meet the minimum requirements of the ICC Statute and the UN Charter. The threshold of any threat to international peace and security sufficient to permit the case to be deferred appears not to have been met based on specific case of the Kenya situation.

On the contrary, there appears to be credible evidence that a deferral of the case would encourage impunity, create unequal classes of accused persons before the ICC and therefore violate the principle of equality of all accused persons as enshrined in the ICC Statute.

Furthermore, any further delay in concluding the trial may cause irreparable damage and trauma to victims and prosecution witnesses. And, finally, it is possible that granting the request will create tensions between those who support the alleged perpetrators and those who support victims.

In summary, it is the duty of the Security Council to encourage the application of, and respect for, the rule of law. It must be seen to be on the right side of history. And, the AU must be denied any opportunity to promote impunity and to continue to remain unaccountable to the people of Africa.