ICC Critics Should Focus on the Victims of Crimes against Humanity

As the clock ticks towards November 12, 2013 set for the start of President Uhuru Kenyatta’s trial at the International Criminal Court (ICC) in The Hague, a section of Kenyan media has reported that some of his close supporters have suggested he should skip the Court because it will embarrass him and the country. The African Union (AU) has also registered its displeasure and will hold a special summit on October 11th-12th with only one item on the agenda: “Africa’s relationship with the ICC”. Generally, critics of the Court within and outside Africa do not like its ‘colonial and imperial’ nature; its interference in ‘Kenya’s sovereignty’ and ‘how powerless’ it is without the membership of countries like China, Russia, USA, India, Turkey and Israel. However, they barely discuss the victims of crimes against humanity or the weak and corrupt judicial systems in some of the member states.

In September, members of Parliament and Senate within the ruling Jubilee Coalition voted to withdraw Kenya from the Rome Statute. Some of their reasons were documented here . There is abundant literature on why the ICC is deemed to be targeting Africa and not the USA, and why it has not charged individuals from developed countries involved in the Iraqi war. A comprehensive article citing African leaders and other scholars was published in the New African magazine on March 1, 2012. Of great interest were sections from a paper by Jacqueline Geis and Alex Mundt titled: ‘The Impact of Timing of International Criminal Indictments on Peace Processes and Humanitarian Action’ which argued that “although the ICC was established as an impartial arbiter of international justice, both the timing and nature of its indictments issued to date suggest that the intervention of the ICC in situations of ongoing conflict is influenced by broader external factors.” The authors referred to the ICC indictment of the late Libyan leader Muammar Gaddafi, which contrasted its silence on other leaders in similar situations. “Gathafi’s [sic] indictment contrasts starkly with the ICC’s silence on the presidents of Syria and Yemen, and the King of Bahrain where similar “war crimes” and “crimes against humanity” as alleged by the ICC to have occurred in Libya under Gathafi have happened over the past year. But Gathafi, then being bombed and wanted by the Western powers, was indicted by the ICC, while, to date, the Syrian President Bashar al-Assad, the Yemeni President Ali Abdullah Saleh, and the King of Bahrain Hamad ibn Isa Al Khalifa have been left in peace.”

Some African leaders who resent the ICC are the same ones who signed and ratified the Rome Statute because they wanted a global court to end impunity. On 4th October 2013, Peter Cluskey wrote in The Irish Times that: “Ugandan president Yoweri Museveni accused the ICC of continually “mishandling complex African issues”. Ethiopian prime minister Hailemariam Desalegn, the AU chairman, told the UN General Assembly last week: “The manner in which the ICC has been operating has left a very bad impression in Africa. It is totally unacceptable.” South African president Jacob Zuma said it was the impression that the ICC was being “unreasonable” – that led directly to the Addis Ababa summit on October 13th.” Nonetheless, ICC Prosecutor Fatou Bensouda maintains that: “Contrary to what has now become a rallying call for those who do not wish to see justice for victims of post-election violence, our cases have never been against the people of Kenya or against any tribe in Kenya.” (See: ICC trial against Kenyan Deputy President Ruto opens).

Victims of crimes against humanity – who cares?

There are thousands of victims affected by the post-election violence (PEV) of 2007-08 in various ways, yet remain voiceless because of the rot in Kenya’s judicial system. Former Chairman of the Kenya National Human Rights Commission, Maina Kiai, made a very moving documentary film titled ‘Getting Justice: Kenya’s Deadly Game of Wait and See’, which captured the testimonies of various victims. However, the most compelling narratives were from two female survivors: Dorothy, who was a Luo by tribe, and Mary, a Kikuyu by tribe. According to the initial Case 2 at the ICC, Dorothy was gang-raped by Mungiki men of the Kikuyu tribe, and called “dog”. They did not kill her but was left scarred and traumatized.

Sick, without income and with very little support from relatives and sympathizers, Dorothy passed on in 2011 as ‘an ordinary person’. Lucy Hannan penned a tribute to her in the Daily Nation newspaper on 29th October 2011: “Dorothy had been failed at every turn in her life: in the 2007 election; in personal security; as an internally displaced person; as a person living with HIV; in restitution; as a victim of sexual violence; in loss of livelihood; in legal justice and human dignity; and finally, in a fatally corrupt and inefficient institution – the health service. But in death, she had taught me one last thing. I finally understood exactly what is meant by a “failing State”.”

In a short film clip titled ‘Mary Meets Dorothy’, the two female survivors meet and share their shocking experiences. Mary, who sustained serious burns when she and others took refuge in the Kiambaa Church in Eldoret, saw her child burn to death when she was pushed back into the church by male attackers from the Kalenjin tribe. Only four people were charged with the attack. Initially, there was political pressure to charge the suspects no matter how weak the cases were. However, they were all released due to shoddy police investigations and lack of evidence. Witnesses were also too scared to testify because they were not assured of witness protection.

Joyce Chepkemoi who is from the Kalenjin tribe and was pregnant during the PEV, was attacked by a gang of around 20 Kikuyu men at her home in Molo. They killed her husband and cut him into several pieces then pushed her face into a fire which they had lit, and left her for dead. She was lucky to wake up in a morgue three days later. Back at home after nine months of treatment, her children were so terrified of her facial scars, they called her a hyena. With deformed hands, she has not been able to work and depends on well-wishers for money and food. She was not able to close her eyes for five years until a corrective surgery procedure was performed around her eyes recently. She requires Ksh1.5 million for three phases of corrective surgery. It was only after the Kenya Television Network aired her plight in July 2013, that a German doctor volunteered to begin the process at Kenyatta National Hospital in September. Some PEV victims have been lucky to join their relatives in developed countries where they receive better medical care.

Forgive, forget and move on 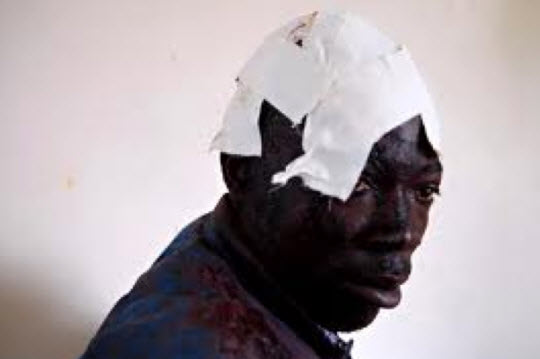 Deputy president William Ruto seems to suffer from amnesia and denial when it comes to the PEV victims. A WikiLeaks cable released in 2011 disclosed that: “Ruto expressed frustration with the media, which he felt had blamed members of his Kalenjin group for locking and burning down a church full of asylum seekers in Eldoret during last yeatr’s election violence,” states the cable. “Ruto emphasised that his people had done no such thing. According to Ruto, the cause of the incident was an accidental kitchen fire during preparations for lunch.” But the Waki Commission report revealed that: “the incident which captured the attention of both Kenyans and the world was the deliberate burning alive of mostly Kikuyu women and children huddled together in a church in Kiambaa on 1 January 2008. They had sought refuge in the church following a 30 December attack on their village of Kimuri, bordering Kiambaa. According to reports, including witness testimony, mattresses and blankets were set ablaze with petrol and thrown into the building while mothers and babies who were trying to flee the inferno were pushed back into the church. Kikuyu men attempting to defend their church and loved ones were hacked to death with machetes, shot with arrows, or pursued and killed.” Around 30 Kikuyu adults and children died in the Kiambaa fire.

Not all PEV victims are witnesses at the ICC, since intimidation by powerful politicians has kept them away, while others have been killed or bought not to witness. Furthermore, the victims have no other court to turn to for justice except the ICC, regardless of its flaws. African leaders are the cause of impunity and will protect themselves from accountability for crimes against humanity committed on their watch. Therefore, critics must also consider such weaknesses as they speak and write against the ICC.

The Jubilee government is determined to pull Kenya out of the Rome Statute, yet it is not assisting the thousands of survivors and others who are victims because they lost their loved ones who were breadwinners. Uhuru and Ruto’s supporters voted to send their cases to The Hague after refusing to establish a local special tribunal. They are aware that the ICC offers no immunity for the presidency and therefore, pulling Kenya out will not help them. The recent Westgate Mall attack could have prolonged Ruto’s stay in Kenya until October 14th as he had requested, but he was ordered by the ICC to resume proceedings on 2nd October or risk being arrested. Equally, the ICC has rejected Uhuru’s plea to postpone his trial until January 2014.

According to Dr. Obote Odora, a consultant in International Criminal Law & Policy, “We should encourage the debates on the ICC to shift from perpetrators and African leaders to victims and lack of independent national courts to address their concerns. Local papers in East Africa are concerned with Uhuruto and not the victims and displaced persons.”