The Disputed Collapse of William Ruto and Unanswered Questions

In the recent past, Deputy President William Ruto has been in the news for all the wrong reasons. Immediately after the assassination of Jacob Juma on 5th of May, Ruto’s name featured prominently as the key suspect who may have masterminded Juma’s assassination. This is because in one of his tweets, Ruto was named by Juma as a person who was “obsessed” with the assassination of the late corruption buster.

At his funeral, Juma’s family was visibly not so enthusiastic about police investigations. This posture was not surprising because since Kenya’s flag independence in 1963, there is no single case of political assassination that has ever been concluded with the assassins being found, tried, sentenced to death and put on death row as per the Kenyan law. Since Juma’s family expected the assassins to remain at large as long as the government was the investigating agency, the family promised to employ traditional Bukusu magic aka ndumba, not just to find Juma’s killers but also to kill them using invisible mystical powers. 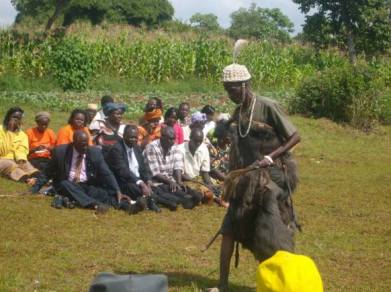 To assist in this mystic killing scheme, and as per the anonymous formula cooked to deliver justice to Juma and his family, Juma was allegedly buried with a torch on his left hand and a knife on his right hand. Symbolically, the torch’s function is to help Juma’s spirit search for his killers while the knife is the ultimate weapon to dispatch the assassins to their graves once they are found. Indeed, a professional sorcerer reputed for his ability to execute such missions with military precision, was brought at the funeral where he performed his rituals beside Juma’s coffin in full glare of the media. Once Juma was buried with the two instruments, the waiting begun in earnest with all eyes focused on William Ruto, the chief suspect.

On Wednesday this week, (barely four days after Juma’s burial) the Kenya Online Universe experienced a major trauma with news that Deputy President William Ruto, had collapsed in his Nairobi house in Karen after which he was rushed to Nairobi Hospital where he was immediately admitted at the ICU. He was said to have been in critical condition.

The news source was a Facebook entry by Robert Alai, a Kenyan who has made a name for himself reporting and un-earthling the misdeeds of the Jubilee government. Alai wrote that he had very credible sources that a VVIP (Very Very Important Person) had been ambulanced to Nairobi Hospital on Wednesday evening. When he later named Ruto as the VVIP, a war immediately broke out among Kenyans on social media.

For Cord supporters who bought the Alai story, Juma’s torch had just caught up with its first victim in the person of William Ruto and his abrupt collapse in his house was apparently the first step towards his funeral as per the mystical Bukusu powers that were controlling events. Sadly for Cord’s supporters, before Juma’s knife could get to work and finish off Ruto at the ICU, the situation changed and Ruto vanished from the spotlight of a bed at the ICU, never to be killed.

That is, William Ruto’s Media operatives quickly worked out a scheme on how they could counter the bad news that was circulating around their boss. Consequently, they went in denial mode – that Ruto never collapsed at all, was never admitted at Nairobi Hospital’s ICU and that the news is not just false but a total fabrication by Robert Alai. To cap it all, the DP’s Office released a photo, to prove that the DP was actually in Mandera (That was Thursday, the following day). 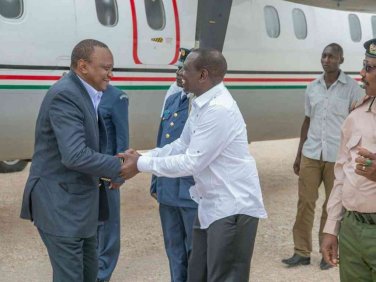 An apparently healthy William Ruto welcoming the President in Mandera

Although the photos appeared to have turned the tide in favour of Ruto’s supporters, there are some questions that were never answered by the “live photos” which were splashed on social media with enthusiasm.

The DP is reported by Alai to have collapsed in the evening of Wednesday, 18th May while the Mandera photos that were being flashed to “prove” that Ruto never collapsed were time-stamped at Thursday, 19th May 2016 at 10 am. The question that was never answered by the photos is the whereabouts of Ruto between Wednesday evening when he supposedly collapsed and the wee hours of Thursday, just before he boarded the military chopper which relocated him to Mandera, on time for the “live photos”.

Speaking on condition of anonymity, one of Ruto’s handlers did admit that a VVIP was admitted at Nairobi Hospital on Wednesday evening. He also said that Ruto is a High Blood Pressure (HBP) patient while he also stated that Ruto trains regularly. Further, he added that the DP is unlikely to suffer a heart attack which, by extension, could cause the victim to collapse. Another important piece of information he gave was that Ruto is human and may check in and out of hospital from time to time. However, the handler never identified the VVIP by name neither did he suggest that the patient was Ruto.

From the above information (which was also circulated on social media), it is possible to speculate that the VVIP in question may as well have been Ruto. Regardless of whether or not he collapsed, the VP may have checked into the hospital because of some serious medical condition. After being examined by doctors, Ruto may have been discharged following a certificate of “fitness” and therefore, “out of danger”. From there, the DP may have returned to his Karen home and boarded the military chopper in the morning before landing at Mandera. In short, the photos alone do not say that Ruto never collapsed. There is a lot of time not accounted for between the time he is alleged to have been admitted at the ICU and the time when he was located in Mandera.

Out of all the evidence so far produced online about Ruto’s alleged collapse, non is more reliable that an alleged Tweet by Aden Duale “that has since been deleted”. According to this tweet, Ruto did collapse on the evening of Wednesday May 18th while the DP was also rushed to the ICU. However, the tweet deviates radically on one key point. Instead of placing Ruto at the ICC at Nairobi Hospital, Duale locates him at the ICC at Kenyatta National Hospital.

Duale Tweet deleted from the Internet as a matter of strategy

Honestly, Duale should be in the know more than Alai. Assuming that the deletion of the Tweet was strategic, is there anyone who can dispute Duale’s input on the collapse of William Ruto on the evening of Wednesday, May 18th 2016? Is information that was provided by Alai being disputed because Alai is hated by Jubilee supporters and the establishment alike? Are Jubilee supporters so much scared about the connection between Ruto’s alleged collapse and the Juma torch-knife prediction? I am not holding brief for Alai but let us move a little bit further with this conversation.

The very fact that one of Ruto’s own handlers was aware that a VVIP had been rushed to Nairobi hospital on Wednesday evening is curious. In fact, information about whoever may have been admitted at the ICU may have been part of disinformation because when the VVIP arrived at the hospital, the spectacular arrival (complete with huge security, entourage, cars and ambulances) attracted both public attention and curiosity. It could not be hidden completely and by giving a hint on social media, one of the handlers may just have been playing a game.

The dramatic arrival was so telling that some eye witnesses rushed online to tweet about what they had witnessed. According to Rein, who was among the first member of the Kenyan twitteratti to update his audience about the incident, “A VVIP was admitted at Nairobi Hospital. GSU Officers sealed off the place. He was entitled to “3 presidential suites, 6 deluxes.”

By this account alone, which has been confirmed on social media by other eye witnesses, and which has not been disputed as an event that happened, who, in Kenya, can cause Nairobi Hospital to be sealed off by GSU? Secondly, who in Kenya is entitled to three Presidential suites at the hospital apart from the President and Vice President? Your guess is as good as mine!

From my hypothesis, it is credible to conclude that the VVIP who was rushed to hospital on Wednesday evening was indeed William Ruto. What can be disputed is whether he collapsed prior to his admission because of lack of credible information about tis collapse. Be that as it may, it is also possible that a worker at the hospital who identified Ruto released information that he was rushed there.

Ruto is known to suffer from high blood pressure, a fact that came out in the media during his ICC trials. A scenario that can be built around the “collapse of Ruto” saga is that on Wednesday evening, the VP may have developed chest pains around the heart area. Both chest pains and increased heart beat are common with HBP patients. The pain may have been severe, causing the DP to panic after which he was rushed to Nairobi Hospital. The DP may then have been examined by doctors who may have released him after concluding that he was out of danger. At that point, he may have returned home on time to enable him to travel to Mandera where the “live photos” were taken to prove he never collapsed.

Regardless of whether or not Ruto collapsed, Kenyans need to be told the truth about the true health status of their leaders.