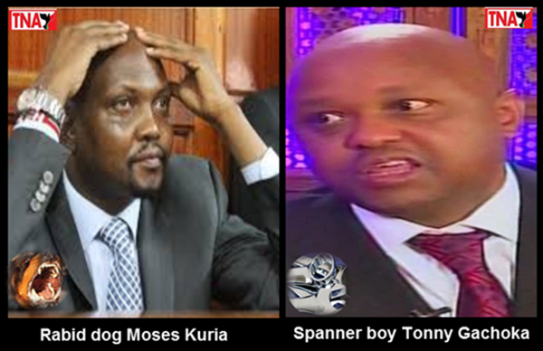 Every time you see TNA’s rabid dog Moses Kuria or spanner boy Tonny Gachoka open their foul mouths apparently ”to articulate their opinions”, get it right – they are either vomiting the opinions of Uhuru Muigai Kenyatta or simply defecating the official position of State House on a sensitive or controversial issue.

Finally, Gachoka has delivered the critical message (to William Ruto and his URP subordinates) that has only been heard in whispers before – that TNA is done with URP and that William Ruto can as well go to hell.

In a surprise national broadcast on KTN where he was hosted by Jeff Koinange, Uhuru’s cousin, Gachoka unambiguously told Ruto and his URP MPs that they were holding Uhuru Kenyatta hostage and that as far as the Kenyatta camp was concerned, “enough is enough”.

Gachoka’s unexpected outburst came in the wake of an equally mesmerizing babble a few weeks ago by Moses Kuria to the effect that he, Kuria, working in cahoots with other accomplices, fixed William Ruto at the ICC.

The key difference between Kuria’s babble and Gachoka’s outburst is that while Kuria was allegedly trying to fix the purported  uncertainty that surrounded the identity of the real “Ruto fixers” at the ICC, Gachoka’s perplexing intervention was designed to deliver the message that the political alliance between TNA and URP is as dead as a dodo. What is more?

Gachoka’s tacit message was delivered using tit-bits borrowed from Kuria’s “Ruto fixing” script. In no uncertain terms, and as if Gachoka’s intervention was a calculated extension of Kuria’s rant, Gachoka told Ruto and his URP bootlickers to stop the balderdash that Uhuru fixed Ruto at the ICC. Gachoka said that Ruto should emulate Uhuru Kenyatta by clearing his own name like Uhuru Kenyatta who did so without blaming anybody for his personal woes.

“Uhuru cleared his name in the ICC and DP Ruto should do that as well,” Gachoka thundered as Jeff egged him to continue “setting the bench on fire”. In his name-clearing strategy, Uhuru exploited the State machine to systematically intimidate, bribe or kill witnesses, a strategy that Ruto has been unable to duplicate because Uhuru’s clowns at State House have refused him access to relevant State resources.

A far-fetched interpretation of Gachoka’s unprovoked advice to Ruto on name-clearing at ICC could not have been relevant had Gachoka not crossed the red line. While linking his advice to Ruto to carry his own ICC cross, Gachoka went out of his way to send a strong warning, not just to Ruto, but to the entire Kalenjin community who voted for Uhuru Kenyatta to a man.

In no uncertain terms, Gachoka said that “If Kalenjins think they gonna blackmail Uhuru with this fixing shenanigans, then we will tell them to bring it on”. The “we” was a reference to Mount Kenya Mafia cartel which runs State House, controls government policy and dictates the national looting agenda. In retrospect, it is like Gachoka was sent by the Mafia to ensure that he crossed the Rubicon from the point of view of the rapidly collapsing TNA-URP relations.

An additional message Gachoka delivered was that he had established a lobby group baptized “Bring It On” whose principle agenda is “to campaign and bring ordinary people who are not in politics… to bring out the achievements that this government has been able to achieve under the leadership of the President Uhuru Kenyatta so that people can be able to look at rhetoric and the evidence… how much development has been done in terms of improving the livelihoods of Kenyans”, Gachoka told Koinange.

Two developments that prompted Gachoka’s outbursts
To underline the seriousness of the lobby group, Gachoka brought along a T-shirt with the “Bring It On” slogan. What was telling was the red colour of the T-shirt, the official colour of TNA, Uhuru Kenyatta’s party.

The timing of Gachoka’s message was not accidental neither could the move be viewed as a cheap publicity stunt by Gachoka through exploitation of the Ruto fixing debate. This is because Gachoka surfaced after two significant developments – intense propaganda campaign by ODM that Uhuru Kenyatta fixed Ruto at the ICC and leaks from State House that Ruto had blocked an imminent Cabinet reshuffle because the DP was not happy with certain names in the reshuffle list.

After ODM released a ten-point Statement outlining the pathogenesis of Ruto’s fixing at the ICC by Uhuru Kenyatta’s allies, State House went into panic mode because the points ODM raised appeared incontrovertible. To demonstrate the “panic 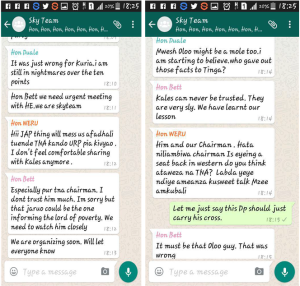 level” within the Uhuru camp following the explosion of ODM’s ten-point missile, a leaked Whatsapp message from the “Sky Team” (which dabbles as Jubilee’s “Kitchen Cabinet” in Parliament) captured the tension. Duale, Jubilee’s North-Eastern hawk and member of “Sky Team”, was quoted as saying that “I am still in nightmares over the ten points”. When spanner boy Gachoka rushed on TV with his freshly cobbled “Bring It On” contraption, he was on a mission to address a more serious reality about Ruto and URP.

For the first time since Jubilee was assembled and rigged to power, Ruto was flexing his muscles as an equal stake-holder in the fragile Coalition. Apparently, he had blocked the appointment of several TNA personalities/allies to the cabinet including: Julius Karangi, former Chief of General Staff, Charles Nyachae, Chairman of the Committee on the Implementation of the Constitution, Gideon Mung’aro, Malindi MP among other changes.

Why Kalenjin may not follow Ruto into Jubilee again
The rejections came hot on the heels of haphazard URP statements that the party was ready to quit Jubilee if TNA failed to help free Ruto from his ICC quagmire. Calls by URP politicians that the party quit Jubilee is what propelled Mount Kenya Mafia cartel into a hurried formation of “Bring it On” before the “lobby group” was handed over to Gachoka to use in his mission to dare URP to quit the Coalition.

With Gachoka’s uncanny theatrics at the Jeff Koinange show, TNA seem to have understood that the Kalenjin support has waned after the Kalenjin ruling class was short-changed on the 50-50 power sharing deal reached ahead of the rigged 2013 elections.

This explains why TNA is seeking to appoint Charles Nyachae to the Cabinet (to woo the Kisii), Gideon Mung’aro (Coast) and why the baby faced Eugene Wamalwa was also appointed to the Cabinet (to woo the Luhyas). In their bid to seek an alternative to Ruto last week, TNA tried to elevate Gideon Moi to the level of a “Statesman” through a trip for a meeting with President Yoweri Museveni in Uganda although Gideon has done nothing at the national level to warrant recognition as a Statesman.

What TNA strategists do not understand is that the tactic of elevating specific sycophants from different ethnic groups to top positions in government as a means of looking for votes no longer works in Kenya after Moi used it recklessly during the one party dictatorship. In 2002, Moi appointed Musalia Mudavadi, a Luhya, as Vice President but this did not win him Luhya votes and his candidate, Uhuru Kenyatta lost the election.

Kalenjins followed William Ruto into Jubilee, not because they loved the Kikuyu but because they sympathized with Ruto who was stuck with his ICC case and whom they saw as a sacrificial lamb following the 2007 ethnic cleansing in the Rift Valley.

The Kalenjin followed Ruto into Jubilee because they benefited from this cleansing by killing the Kikuyu, chasing them from the Rift Valley and confiscating Kikuyu land which has never been returned to date. By following Ruto into Jubilee, the Kalenjin believed that the government would help Ruto defeat the ICC agenda while sharing power (on a 50-50 basis) with the Kalenjin ruling class, expectations which have evaporated as hopes are tied on prayers.

As for now, URP has been put on notice to quit Jubilee. However, “the politics of the stomach” will not allow URP to quit because such a move will cause the government to collapse at a time when URP politicians still have more than one year to eat.

As TNA continues to betray URP on almost every issue, the most possible scenario is that URP will continue to be in government while looking for alternative political alliances. Here, URP has very little political options because Nyanza, Western, Coast and Eastern provinces (which form the bulk of the voting block) are either gravitating towards CORD or are firmly in the Coalition.

TNA is in a more difficult situation because if it loses URP, it is impossible to envision how the party will find a political ally that might help it win elections in 2017 after the bigger ethnic groups have been scooped by CORD. Under the circumstances, the only way through which TNA can return to power with Uhuru Kenyatta as President is through election rigging.