South Africa: Xenophobia Is a Product of Apartheid 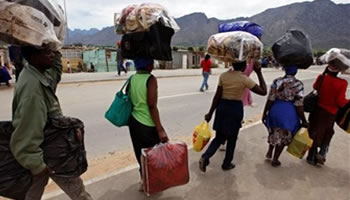 On 21st May 2008, I posted an article on the now defunct ‘African Path’ website about the then xenophobic attacks by black South Africans on other blacks in South Africa, which ended in around 62 fatalities and massive property destruction. Many believe that the latest violence in Durban erupted after the influential Zulu King Goodwill Zwelithini recently said that foreigners should “pack their bags” and leave. Xenophobia means “intense or irrational dislike or fear of people from other countries.” This morning, my good friend from Uganda, Mr. Godfrey Onen Omony who lives in Stockholm, shared the following thoughts on WhatsApp, concerning the violence: “After the downfall of apartheid, all the black presidents (up to Zuma) who ruled SA did not address the apartheid-enforced issues of poverty, unemployment, education and healthcare among the poor blacks, coloured and Indians. They are all big headed corrupt thugs and idiots.” What is your take on the violence? Below is a verbatim copy of my 2008 piece.

We currently see ghastly pictures and read disturbing stories about the raw brutality unleashed by Black South Africans on foreign Black Africans. Why? Is it because of fear, hatred, wrong names and languages or perceived physical differences between them? Are the foreigners bearing the brunt of anger because it is assumed they enjoy the wealth that remains elusive to majority South Africans? Will the violence make the government improve its wealth distribution strategies?

I agree with Sokari Ekine that the present government has failed miserably in its post-apartheid economic reforms. I was in South Africa when Archbishop Desmond Tutu delivered the 2004 Nelson Mandela Lecture which described South Africa’s rising poverty as a powder keg waiting to explode, if no immediate solutions were found. He also criticized the Black Economic Empowerment program for favoring a small section of the emerging black elites thereby shutting out many blacks from sharing wealth. Some black ANC politicians defended the program saying many South Africans were better off today than during the apartheid era. When I discussed Tutu’s speech with some blacks, they told me that South Africans were doing just fine compared to the Palestinians who were then being confronted by the Israelis.

My take on xenophobia 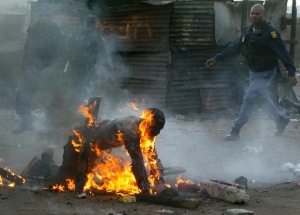 In my opinion, xenophobia in South Africa (SA) is a product of the former Apartheid system that segregated races and communities thereby raising suspicions towards ‘outsiders’. Before I got started on this article, I thought of one song called Chileshe by South Africa’s great singer, Hugh Masekela. I looked at the CD cover which I have at home then googled to see if I could use its words and Voilà! Koluki had already done this last January. The song was originally sang in 1968 and urged black South Africans not to mistreat or call other blacks dirty names as done to them by whites during apartheid.

I cite a few lines from the cover: “With the influx today of peoples from all over the African Diaspora into South Africa, the level of xenophobia has risen to disgusting heights. Most paradoxically, the song is even more popular amongst black South Africans today and is deeply loved by the new immigrants which helped the ‘Black To The Future’ album to platinum heights.” It is important to note that the song focuses on the period when Africans from the neighboring countries used to flock the mines of Johannesburg to work. Already then, the Johannesburg people viewed themselves as more ‘advanced and civilized’ than those outsiders. Did black South Africans develop the current animosity when they refused to work in the mines but saw outsiders doing so, thereby earning income at their expense? Is it by coincidence that the present violence is centered in Johannesburg?

There are so many experiences that could add up to the current animosity targeted on non-South African blacks. A term that best defines how black foreigners are described by SA blacks is Makwerekwere. Henk Rossouw (a white South African) has penned experiences from his Zimbabwean wife about this: “I remember the guard called us dogs. And when I worked in the clothing factory they called us makwerekwere because South Africans say that the voices of black immigrants scrape against their ears, like insects.” From her experience, it does not matter that a black South African is physically darker than an outsider; he/she will ‘sniff’ you out directly because they know foreigners.

I recall reading another makwerekwere experience by Alois Rwiyegura in 2005 who was shocked when he was first called so. Even the police use this term when they stop non-SA blacks to check their papers (identification cards or passports). This is reminiscent of the PASS days when the apartheid police dealt ruthlessly with blacks who did not carry the right identification papers.

Lack of exposure and suspicious minds 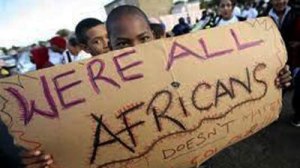 During my first visit to Johannesburg in 2002, a colored policeman beckoned me with a gun out of a group of two other African colleagues as we went to meet a friend at the main train station. When I came closer, he asked whether I was from “Niger”, possibly Nigeria. I answered “NO” and asked to see my passport. I answered that I did not know there was a rule to walk with one. I showed him my Swedish national ID card which he could not understand its contents. One of my colleagues then produced his South African work ID card and said that I was a guest from Europe. That was when the policeman eased up and told me to be careful with my money and to enjoy my stay.

I also spent a lot of time talking to various people, watching TV and traveling to understand the social disparities especially among blacks. There was once a violent clash in a Johannesburg slum between black refugees and black South Africans, which ended in fatalities and fires that gutted a large number of shacks. The foreigners were then blamed for robberies, ‘stealing’ South African women and taking local jobs. When Ms. Winnie Madikizela-Mandela visited the slum to console the victims, she shed tears for the poor conditions they lived in. They showed her bags of rotten maize meal which were provided to them by authorities as part of the feeding program. She begged the South Africans to treat foreign Africans with dignity because they had accepted them in their countries during the anti-apartheid struggle.

Whenever I had an opportunity to socialize with black students at my host university, I realized that many were quite naïve and ignorant about other Africans outside their country. Quite a few had traveled within SA, let alone Africa. For instance, when they asked whether I was born in Sweden and I answered “No, I was born in Kenya”, they did not know the geographical location of Kenya. One breathed a sigh of relief when I explained that Kenya was in Africa. He then told me: “But we are feeding your people; we have so much food”; meaning that any African who was not South African depended on them. This period was also when Swaziland was going through a very bad drought and had to import maize from South Africa. They equally believed that their country was the largest in Africa.

The same students kept telling me how blessed SA was to be leading Africa from the bottom (geographically). Her position dominates the whole continent in terms of wealth and military prowess. When I told them about my objection to their government’s huge investment in the Swedish jet fighters called JAS-39 Gripen instead of improving the wellbeing of the poor, they were categorical that they needed the jets so that no African country could attack them, etc.

It was interesting to see the reaction of some black students when they visited my room at the guest house outside the university that hosted me. They were shocked to learn that I paid 150 rand per day for accommodation. It was unaffordable for the majority and they immediately asked if the South African government was paying for this. I told them it was part of my research funding from Sweden. I then reminded them that they had said they fed other Africans, so why were they shocked at the cost of my accommodation?

Another very interesting observation was when people greeted me in the local language (Setswana) yet I could not reply. One afternoon I was walking with the lady who owned the guest house to take a helicopter ride offered by one of her guests (a white man), who was a pilot. Two black men said hello at the entrance of the venue. Naturally, I did not understand but the landlady did (she is white but was brought up on a farm where they had black workers so had learnt Setswana). After walking a few meters ahead, she told me that those people said bad things about me because I had refused to return their greetings.

I had a similar experience in 2004 while in Durban and wore a shirt decorated with pictures of African wildlife. A man then began speaking to me in the Zulu language. I politely asked him to speak in English because I could not understand him. He replied that so many black South Africans were acquiring a bad habit of running away from their traditions by pretending not to understand their mother-tongue. I insisted I was not even South African, but he refused until I had to move away from him.

Who is a South African?
I conclude with a quote from Michael Bleby’s latest op-ed on the violence: “South Africa will only free itself from the sort of violence it faces right now when its practical policies of redress and affirmative action are informed by a level of thought that does not seek to define what it means to be South African, but permits an evolving definition. This is the only way to resolve the inherent contradiction of a society trying to alter the imbalances of the past 350 years while fostering a sense of national identity that embraces all people and that all people embrace. The alternative is too horrific to contemplate: Today it’s South Africans versus Zimbabweans. Tomorrow it’s white South Africans versus black South Africans and the following day it will be Zulus and Xhosas fighting each other. This is a downward spiral.”