Why Timberlake Killed Son Sinclair by Hitting Him in the Stomach 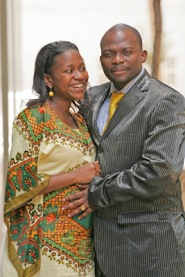 Esther and hubby Timberlake in Australia

A father accused of murdering his three-year-old son was trying to rid him of aliens and demons before paramedics found the boy dead, a court has been told. The allegations were made by police during a bail hearing for the man’s wife in the Brisbane Magistrates Court on Friday.

Esther Adongo Timberlake, better known as Esther Arunga in her home country of Kenya, is charged with accessory after the fact to murder. Her husband Quincy Timberlake, also 34, has been charged with murder over the boy’s death. He is a former Kenyan presidential hopeful. Emergency services pronounced their son Sinclair Timberlake dead when they arrived at the family’s Kallangur townhouse early on June 18. Mr and Mrs Timberlake told police the three-year-old boy had fallen down the stairs while playing with a sibling.

However, police allege Mrs Timberlake changed her version of events multiple times, and privately told them that she believed her husband was mentally unwell. Court documents reveal Mr Timberlake admitted himself to Brisbane’s Prince Charles Mental Health hospital on July 3. A week later he was made an involuntary patient.

Four days later, Mrs Timberlake told officers her husband was pushing on the boy’s stomach repeatedly because he believed he had been possessed by aliens and demons. She said her husband “was speaking as if he was attempting to save [Sinclair] from alien embryos implanted in his stomach”, according to police documents tendered in court.

“She then observed the father of the deceased punch the deceased in the stomach with his fist,” the documents said. The boy was then thrown against a wall, before he was showered, dressed and left on his bed. Police said Sinclair’s initial post mortem results were not consistent with a fall down the stairs. He had suffered internal injuries, bruising to his arms and torso. He also had a number of other injuries Mrs Timberlake said were caused by traditional Kenyan healing techniques prior to June 18.

Mrs Timberlake was granted bail and will return to court on October 20. Her bail conditions include that she surrender her passport, report to police twice a week, not be closer than 500 metres to an airport and have no contact with her husband. Mrs Timberlake declined to comment when she was released from the Brisbane watch house. Police only laid charges against Mr Timberlake last week, before Mrs Timberlake was arrested on Thursday. They both intend to fight their respective charges.

Outside court, Mrs Timberlake’s lawyer Chris Ford said his client was struggling with the stress of losing a child. “Clearly we are pleased that the court saw fit to give bail today,” he said. “Ms Timberlake is understandably upset about being arrested. She’s got a lot to deal with at this present time, particularly with two children to look after.” “She’s not coping very well … It’s a difficult situation for any mother, to have lost a child. It’s a very unusual case but it’s a tragic case.”

Mr Timberlake is a former Kenyan presidential hopeful who had stated his intention to contest the country’s 2017 elections. His wife was a former television anchor and barrister. The pair said they were forced to flee to Australia after being persecuted in their home country.

Last week, Mr Timberlake’s lawyers said their client was a “loving father” and that the boy’s death was “tragic”. “There is of course more to this tragedy than can presently be disclosed and we would caution against any prejudgment of this case,” the lawyers said in a statement.