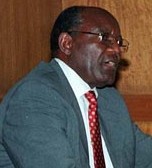 When the biggest tree of the village falls, birds scatter and creatures that were enjoying its shade scamper for safety. So it was on Tuesday, July 15, 2014, when Adhu Awiti transited to be with his ancestors. How mind-numbing and distasteful is the hour when we can no longer see, listen to and converse with him! The hero for countless has fallen. And as Mark Anthony said of Julius Caesar, “Oh what a mighty fall thou was!”

Dr. Awiti was many things to many people. His wife has lost a loving husband and a life companion. His children have lost a father, a provider and a compass in life. Kanjira and Karachuonyo have lost a great son, a community role model and leader. But to me and hundreds of others that worked overtly and covertly with him, Adhu was a father, mentor, confidante, best friend and symbol of revolutionary disposition. He was a true comrade of mine.

Adhu enlisted discipline, patience and simplicity as natural allies and strategic thinking and tactical analysis as weapons of political struggle. He wore one the thickest skins, always appreciative of criticism and self-criticism, which he viewed as routes to individual self-correction and enrichment. He was a man of cheerful demeanor.

I first met Adhu in December 1980, when I had just joined the University of Nairobi. We had a student re-union in Kisumu and he was a keynote speaker. I was struck by his brilliance and eloquence. In that memorable speech, he reminded the students about their responsibility to the historic national struggle and the need to remain uncompromising.

Dr. Awiti told us that the quest for social justice, academic freedom, political plurality and democracy must remain our eternal battle cry. He noted that the political freedom  was the fruit of the revolutionary tree watered by the blood of veterans like Dedan Kimathi, Pio Gama Pinto and Me Katilili as well as the unrelenting sweat and intellect of nationalists like Jaramogi Oginga Odinga and Bildad Kaggia. He beseeched us to defend it. I did not meet him again until April 1987, when I had the dubious honour of welcoming him at Kamiti Maximum Security Prison. I was a year older there on Sedition sentence.

From this point on, we forged a comradely relationship that has lasted to this day. Even though we were held in Segregation Block, we managed to establish a study circle at Kamiti. Members of this circle included Odindo Opiata, Kiongo Maina , Kamonye Manje, Dr. Odhiambo Olel, Peter Young Kihara, Onyango Oloo and Owuor Atieno, among others. We spent prison time together reviewing our history and struggles; focusing on future revolutionary work. He was later transferred to Nyeri’s King’ong’o Prison where he joined Odenda Lumumba, Onyango CA and others.

On release from Moi’s jail, we regrouped to continue with the struggle. He became the fulcrum of our cell in Kisumu comprising among others Muga K’olale, Onyango CA and Olel. Following the disruption of this cell after the Sabasaba uprising in 1990, Adhu and I fled the country. We reunited in exile and continued to link up with the movement back home and intensify the agitation for return of multiparty democracy. As Moi remained recalcitrant, we were able to secure facility to train a Platoon in guerilla warfare, thanks to Adhu’s extensive international connections. Section 2A was repealed just when the recruits were finalizing their training. These cadres were quietly reintegrated and became active in the opposition.

The sheer tenacity of will Adhu commanded; the tactful and unmatched leadership he proffered; the sobering but penetrating tactical analysis, which was his gift; and the unparalleled generosity of spirit he exuded are virtues that belong to the greatest of ages. Kamoji Wachiira, Adhu’s revolutionary peer, says: “A remarkable comrade has passed on. In the early days we spent many seemingly endless weekend nights working away. Planning, reviewing and summarizing positions and strategies in varied hide-outs and strange dives, ever seeking security and anonymity. Strange hours tough schedule: Arrive on Coast Bus at 7pm. I pick him up at River Road depot. Then “unslept” drop him back at 4.30 am for departure westward. I recall one such night we also had to pick up a Museveni ‘sibling’ coming for Adhu to help get to Malaba. Most of these Museveni siblings were actually cadres not relatives as such. … Disciplined to a fault. A rare gentleman comrade, selfless and devoted always. One of the keenest, most honest intellectual minds we have had in the struggle.”

He evidenced these political skills on the national scene, being a founding member of the underground Workers Party of Kenya – the parent organization of, among others, the December Twelfth Movement – so central in spearheading progressive political change since early 1970’s. Dr. Awiti suffused his service in government with his beliefs about the principles of public service. As Planning Minister, he believed that government should be frugal, effective, and efficient and must be a rallying point where only the committed and selfless serve as leaders at all levels of our society. Before this he teamed with, among others, Prof. Edward Oyugi to found the Social Development network (SODNET) that has been at the forefront of anti-corruption and budget transparency campaign.

Much remains undone, of course, but Adhu leaves us a good legacy and a solid model to emulate. Fare thee well Omin Angela!