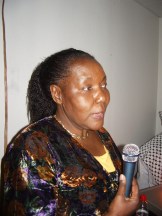 Chairlady, ODM Scandinavia says there is need for Mass action

Most likely, the attempt by the Jubilee government to curtail Freedom of Assembly in Kenya must have shocked millions of Kenyans who believe in the New Constitution, democracy and the rule of law. Inspector General David Kimaiyio has banned a mass rally scheduled for Saturday, May 31st 2014 to welcome CORD’s Principle Raila Odinga citing security concerns. The ban should be the last straw in the consistent attack by the corrupt Jubilee government on Freedom of Assembly of citizens of the Republic of Kenya under the increasingly dictatorial regime of two crimes against humanity suspects, Uhuru Kenyatta and William Ruto.

Finally, it is time for all progressive Kenyans who love democracy and who believe in the New Constitution to rise up and say “NO” to the autocratic, tyrannical, oppressive, totalitarian and despotic posture of a collapsing regime that believes that it can salvage itself by arrogantly curtailing the democratic rights and freedoms of citizens of the Republic of Kenya, freedoms enshrined in the New Kenyan constitution.

In the run up to the illegal ban by Kimaiyio of political rallies, Kenyans have had to stomach a series of political decisions that could have, under normal circumstances, precipitated a mass uprising, if not, a national insurrection to get rid of the emerging Uhuru dictatorship.

To be specific, since the Jubilee government came to power through a rigged election, Kenyans have had to put up with massive corruption in government. The Ksh 100 million Ruto’s Hustler Jet scandal, the Ksh 8 billion lap-top scandal, the Ksh 400 billion Standard Railway Gauge scandal, the 6% NSSF rip-off scandal of exploited Kenyan workers, the scandal involving the use of public funds to finance the ICC project by the two war criminal suspects, the recent Ksh 1.4 billion Anglo-Leasing payment scandal (just to mention but a few) are some key scandals which Kenyans have had to put up with without any organized resistance.

This is against a backdrop of rampant tribalism in government (Kikuyu come Kikuyu go), stagnation of wages especially in the Civil Service, draconian actions by the government against striking workers living on starvation wages, attack on innocent University students by police, lack of accountability in government, failure to maintain security across the country, attack on Kenyan-Somalis by corrupt government security agents, government’s stage-managed terror attacks together with failure by the illegitimate Uhuru regime to address the myriad of urgent issues affecting  ordinary Kenyans are just but a few issues that ought to have precipitated an abrupt overthrow of the thieving Uhuru-led Jubilee government through mass action.

The horrendous violations of sacrosanct Rights and Freedoms of citizens of the Republic of Kenya currently being perpetrated by the corrupt government of Uhuru Kenyatta is against a background of an openly stolen election; the misrule of Kenya by a thieving, corrupt and irresponsible Mount Kenya Mafia cartel; the re-introduction of political assassinations of suspected government opponents in the name of eliminating terroism; massive miscarriage of justice by the Mutunga-led judiciary; shocking sycophancy in favor of the Jubilee government by well-known Jubilee boot-lickers; conscious destruction of devolution politics for Jubilee’s political survival; systematic muzzling of Freedom of Press and multiple other violations of the New Kenyan constitution are all signals that it is time for Kenyans to rise up and rebel against a bogus and rotten regime which has clearly become unable to govern and which is ripe for overthrow.

Under the circumstances, it is the common position of the Kenya Red Alliance (KRA) and ODM Scandinavia (Opposition in Kenya Diaspora) that Kenyans from all walks of life should respond positively to calls by the Official opposition, CORD, that the ban by Inspector General (IG) David Kimaiyio of CORD’s rally on Saturday, 31st May be totally ignored.

Making the country ungovernable
What is known is that the New Kenyan constitution has not been suspended and therefore, the IG can, under no circumstance, curtail the right of Kenyans to Assemble peacefully. The Kimaiyo ban of Raila’s welcoming rally in Nairobi is not only null and void. It is illegal, against the Constitution, illegitimate, uncalled for, myopic, dictatorial, autocratic, insane, thoughtless and, most importantly, unacceptable and down-rightly lawless, to put it mildly. It is not just time to call for Kimayio’s resignation or to demand that the illegal Jubilee government be disbanded . It is time to send a clear signal to Uhuru Kenyatta that “enough is enough” by sending correct signals to the illegal regime through mass action.

The government is depending on the strategy that its brainwashed security forces will be able to stop the Raila rally by blocking the venue of the rally and using tear gas and live ammunition to quell any riots. This is a strategy that has been used by previous governments over and over again. If CORD lives up to expectation and does not call off the rally, the minimum is that some Kenyans will die in the process of liberation while the lucky ones will be arrested or taken to hospital after sustaining injuries on the front-lines. It is for this reason that the people of Kenya ought to take matters onto their own hands because since the issues at stake are well understood by the man in the street, Kenyans should not expect CORD to arm them in order to fight a corrupt and violent State.

Unlike the situation in Eastern Ukraine where the opposition is armed to the teeth and therefore able to stop an illegal government from implementing an illegal policy in favor of a Neo-nazi government that seized power illegally, CORD is basically without a single fire-arm neither does it openly own a single bullet.

Under the circumstances, what is known is that Kenyans who will be under attack by security agents will basically be on their own. The key to winning the battle or shaking the Jubilee government down to its foundations will therefore depend on the ability of CORD supporters to act independently in the cause of confrontation with security forces. In short, it will be the responsibility of CORD supporters to plunge Nairobi into total chaos without a central command that can be seen to be responsible. The situation could be better if the struggle could spread to other opposition-friendly towns and cities. If CORD leaders live up to expectation and proceed with the banned rally, it is almost a foregone conclusion that in the event of chaos, CORD leaders will disappear or melt into the crowd if they are not arrested.

Developing a strategy for Jubilee Overthrow
It is therefore important that CORD supporters develop a strategy to deal with security forces during confrontations because if they don’t, the struggle will be reduced to an incident that is much too familiar – a rally is called by the opposition, it is banned by an illegal government that tramples on the rights and freedoms of citizens, security forces are sent to attack the rally, some Kenyans are killed, others are injured, statements are made by politicians condemning police brutality, church leaders take positions and call for calm, NGOs release Press Statements attacking police brutality while at the same time condemning the government for violating the Rights and Freedoms of Kenyans,  the media feasts on the riots by bringing graphic images and videos to the public before the struggle is contained as life goes back to normal.

In order to succeed, the struggle against the Jubilee government needs to be sustained indefinitely. In short, this time round, Kenyans need to make the country ungovernable. The Jubilee government knows that it is living on borrowed time. The only reason why Kenya is not yet on fire is because the so called Official Opposition has failed to lead the masses into a struggle to overthrow the government.

The reason why the IG is violating the Constitution by unilaterally banning rallies is because he is protecting the interests of the corrupt Mount Kenya ruling cartel, his paymasters. The task of Kenyans in the face of a weak Opposition which cannot clearly call for mass action (they have called for “national dialogue”) is to utilize opportunities created by the Opposition to send a clear signal to the Uhuru government that either it resigns or the country is made ungovernable on grounds that citizens are no longer able to accept the rot within the ruling class.

If the masses do not understand this point, the CORD rally will be banned, Wananchi will be attacked by the police (aka security forces), some will die or get injured in the process before everybody returns home for peace to return and for survivors to live to fight another day in a never ending cycle. It is time to act and to show the Jubilee government the door through mass action!