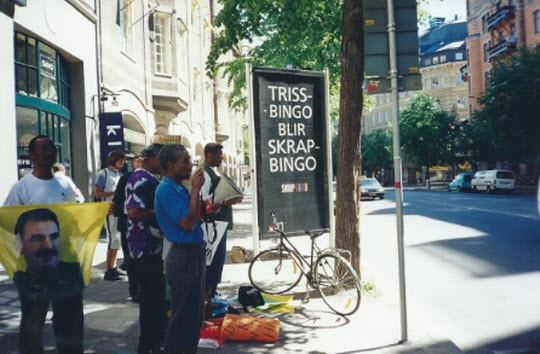 Mathenge Karundi (in blue holding a megaphone) together with other Kenyans picket outside the Kenyan Embassy in Stockholm to protest the capture of Abdullah Ocalan, the PKK leader, in Kenya in 2002

Following the passing of former Stockholmer, friends of the late Karundi Mathenge will fund raise in support of his funeral that will take place on Saturday 22nd March 2014. The funds drive will take place at Hallunda Bar on Friday, March 7th from 17.00 hrs.

Speaking to KSB, Mr. Martin Ngatia said that the late Karundi was foced to flee to exile to continue with the anti-Moi struggle because he loved Kenya. Mr. Ngatia said that one way of honoring Karundi following his departure is for friends to show solidarity with his bereaved family by meeting and being part of his funeral arrangements.

Mr. Karundi returned to Kenya a few years ago to settle back home following the ascension to power of former President Mwai Kibaki. At the time he left Sweden to resettle in Kenya, Mr. Karundi was the Chairman of the Democratic Party (DP) that was being headed by Kibaki. At one time, Karundi hosted president Kibaki at his residence in Alby when Kibaki came to Stockholm to campaign in the run up to the 2002 General elections.

The departure of Mr. Karundi will, most likely, be felt by many Kenyans who knew him since his days of student activism at the University of Nairobi before he fled Kenya to Tanzania from where he made his way to Sweden during the early 80s. The initiative takers appeal to Karundi’s friends, well-wishers and sympathizers to turn up at Hallunda to celebrate the life of a Kenyan who gave majority of his time on earth to the liberation of Kenya.