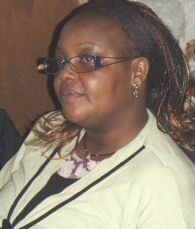 Pastor Beatrice Kamau: “I am not part of any Committee”

Pastor Beatrice Kamau, a Kenyan in Stockholm, has dissociated herself from organization of the scandalous “Kenya at 50” Jamhuri celebrtaions which the Kenyan Embassy in Stockholm has scheduled for tomorrow, Friday 13th December 2013.

Speaking to KSB, Pastor Beatrice said that following the publication of a group photo they took with the Ambassador at the Kenyan embassy after a courtesy call on Ambassador Dr. Joseph Sang, she has been receiving a lot of phone calls from concerned Kenyans who believe that she is involved in the matter.

“The problem is that many Kenyans think that I am part of a Committee which may have organized the event. I wish to state that I am not a member of any Committee connected to the Jamhuri event neither do I know of the existence of such a Committee”, the Pastor told KSB.

She clarified that when she became part of the group that paid a courtesy call to Ambassador Dr. Sang, she went there as a member of the Kenya religious community after the Embassy called her to join a group of Kenyans who were also at the meeting.

“My presence at the meeting was in response to a telephone conversation with an Embassy official to explore ways of how Kenyan Christians in my congregation could work with others in the interest of the Kenyan community in Stockholm”, she said. She added that the agenda was not to discuss “Kenya at 50 celebrations” or to set up a Committee.

She said that after the publication of a group photo linked to the planned celebrations, she could understand why many Kenyans were calling her to establish what may have happened. She said that those who had called her wanted to know how a decision was reached to stage “Kenya at 50” celebrations at a ghetto hall in Husby. “I do not have any explanation because I do not know anything”, the Pastor told KSB. She said that if she decides to attend the event, she will be doing so on a personal capacity and just like any other Kenyan.

Pastor Beatrice is the second Kenyan to publicly dissociate herself from the planned event in less than 24 hours. The first to do so was Mr. Githuku Muirani who told KSB that the group photo in which he also appeared had sent wrong signals to Kenyans that he may have been involved in the “Kenya at 50” event. Mr. Muirani told KSB that he was not part of any Embassy committee.

The public clarifications of the two Kenyans have left Ambassador Sang a lonely man because perceived members of a Committee that he promised to set up to help organize the “Kenya at 50” event are consistently distancing themselves from the event.

After it emerged that the “Kenya at 50” celebrations will be held at Husby Träff and for a mere four hours, Ambassador Sang is in deep crisis and has so far failed to come up with explanations regarding several questions Kenyans have posed in connection with the planned event.

Many Kenyans cannot understand why the biggest Jamhuri event ever staged in Stockholm cannot be held at a Five Star hotel among other key questions. Since the issue came up, Ambassador Sang has gone underground while the Ambassador’s Secretary remained tight-lipped, saying that only the Ambassador or his deputy could handle the questions. Both have been “out of office” since Monday when the scandal broke out and have failed to respond to KSB’s phone enquiries seeking answers to critical questions.