December 2007 Election Campaigns and the Demonization of Raila Odinga

Raila is not circumcised 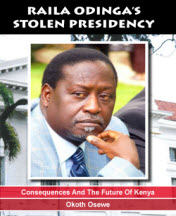 The demonization of Raila Odinga

Part of the PNU dirty election strategy was to demonize Raila Odinga as a way of making him unpopular to subvert his ambitions of rising to the Presidency. This was done using divergent propaganda conduits that were at the disposal of PNU. The following is a summery of the most vicious and apparent creations that PNU tried to employ in their anti-Raila campaigns, which were eventually defeated. Raila is not circumcised

Kenya is a conglomeration of forty-one ethnic groups that have their own cultural practices. Before the December 2007 elections, political competition for Kenya’s leadership was mainly viewed as a tug of war between the Luo and the Kikuyu. As a cultural practice, the Kikuyu circumcise their males at a fairly early age, a very significant ritual that every Kikuyu father will ensure that his son undergoes. This ritual is the mark of entry of the Kikuyu male into adulthood, a ritual that accords the circumcised respect and masculine recognition. For the Kikuyu who believe in the meaning of circumcision, a male or a female who is not circumcised remains a child and is considered inferior to other Kikuyus. Such a person is not allowed to father children because this would be an abomination. According to legend, an uncircumcised person could bring drought or some curse to the community by begetting a child because such an act would anger the Kikuyu Gods who would, in turn, bring great wrath to the community. If such a union occurred, the victims had to go to exile. Circumcision was seen as a way of maintaining healthy contacts with the ancestors and it is this context that Kikuyu traditionalists are opposed to being led by a person who is not circumcised. For the Luo, circumcision does not feature in their culture. As a sign of passage into adulthood and recognition as a Luo, both male and female members of the community used to undergo a ritual involving the removal of six lower teeth. This practice has largely been abolished among the Luo communities because of “modernity.” Another reason for removing the six lower teeth was that a Luo could be fed without problems in case of illness that made it impossible for the Luo to eat food (for example, in a tetanus attack). With the advent of science and technology, which introduced alternative methods of feeding the sick, the Luo have quietly moved away from nak, the tooth removal ritual.

December 2007 General Election Campaigns And The Demonization Of Raila Odinga When Raila Odinga presented himself for election as President in 1997, the big argument of members of the Kikuyu community was that Raila was unfit as a Presidential candidate because he was not circumcised. For the Kikuyu traditionalists, there is no way a person who is not circumcised was going to lead them as President. It is important to mention Kikuyu traditionalists because there are Kikuyus who have moved away from this belief system and who accept that the issue of circumcision is a purely cultural issue that should not be featured in political debates especially when the leadership qualities of an individual are being considered. Apart from the Kikuyu, the Luhya, the Kisii, the Kalenjin and other ethnic groups also circumcise. However, these groups did not raise the issue of Raila’s circumcision status as forcefully as the Kikuyus did. This led millions of Luos and Kenyans who believed that this line of reasoning was incorrect to view members of the Kikuyu who were harping on the issue as ethnic chauvinists who did not respect other cultures and who did not want Raila to stand for President because he was a Luo. In his defence, Raila maintained that circumcision was not an issue in the election campaigns. The son of Odinga converted the concerns of the Kikuyu traditionalists into a source of ridicule, saying that the circumcision of the flesh was not important in the current world and that what was key was whether a person was circumcised in the mind. Raila accused his detractors of being short-sighted, giving examples of several world leaders who were not circumcised but who were leading powerful nations.

The United States, Britain, France, Russia, China, Japan and other countries were routinely given by Raila and his supporters as examples to prove that those who were raising the issue of Raila’s circumcision status in relation to his Presidential candidacy were naive. Raila wondered aloud why males were concerned about his circumcision status when the women were not raising any criticisms. He repeatedly told his audiences that despite the complaints by a few mischievous men, women remained “satisfied” and that under the circumstances, males who were raising the issue should re-examine themselves. He encouraged his critics to look beyond their sexual organs, adding that nations are not led with male organs but with sound political and economic policies. The questions about Raila’s circumcision status continued to persist during the period Raila was courting Moi to enable him take over as Presidential candidate of the New KANU before the Uhuru Project was introduced. However, by the time the December 2007 came around and it was becoming clear that Raila would be the man to watch, Kikuyu traditionalists who had traditionally harped on the subject appeared to have been vanquished. A few cases did emerge where the issue was raised but much of these concerns were downplayed by the media because the issue of Raila’s circumcision status vis-à-vis his bid for the Presidency had largely been sidelined.

Raila is a Political Nomad
This accusation was used by the PNU propaganda machine to try and convince Kenyans that Raila is a politician who does not have the interest of Kenyans at heart as allegedly shown by his inability to settle in one political Party. As a background, Raila was accused of having led the coup under the “People’s Redemption Council” but that after his release from detention, he came out to lead the “Kenya Revolutionary Movement (KRM)” to try and topple the Moi regime once again. There is no strong documentary evidence to link Raila directly to these organizations but the aim of PNU propaganda was to project him as a person who has all along been a political nomad. After his alleged stint in KRM and return from brief exile in Norway, Raila joined the splinter Forum for the Restoration of Democracy (FORD-Kenya), which was being headed by his father, Oginga Odinga, after Moi gave in to pressure to re-introduce political pluralism in Kenya. After the death of his father, Raila had Presidential ambitions that could not be realized through FORD-Kenya because Kijana Wamalwa had moved to settle in FORD-Kenya as its Chairman and, by extension, its future Presidential candidate in any immediate election, which was, nevertheless, scheduled for December 1997.

Realising that his chances in the Presidential race using FORD-Kenya were slim because of the impossibility of dethroning Wamalwa after a few trials, which degenerated into vicious war of supremacy within the Party, Raila and his supporters moved to the National Development Party (NDP), which immediately recognized him as the Party’s Chief and flag bearer in the scheduled 1997 Presidential elections. This movement from FORD-Kenya to NDP was used by PNU in their 1997 and 2007 propaganda to strengthen their argument that Raila was a person who was moving from Party to Party because he was a political nomad. After the December 1997 election, Raila failed to clinch the Presidency and what he did next is he decided to work with Moi as a new way of getting to power. The consequence is that the new NDP he had occupied was soon swallowed by Moi’s Party to form the “New KANU” Party, which, Raila believed, would see him present himself as Presidential candidate under the new KANU ticket. To be sure that he was better placed to lead the Party back to power in December 2002, Raila worked his way up the Party’s ladder and became its Secretary General. Raila’s merger of NDP with KANU to form the New KANU was used by PNU loyalists to argue that the move showed that Raila was not consistent and, therefore, should December 2007 General Election Campaigns And The Demonization Of Raila Odinga not be allowed to take over Kenya’s Presidency because nobody knew exactly where he stood.

After Moi let Raila down through the introduction of the Uhuru Project, the son of Odinga quickly moved into the Liberal Democratic Party (LDP) to set up a new political base, four months before the December 2002 election in which he was supposed to be presenting himself as Presidential candidate. However, the situation was very tight because the son of Odinga had no time to convert LDP into a National Party that could allow him to stand for President so he coined the phrase, “Kibaki Tosha” and began discussions with Kibaki on the way forward. Kibaki badly needed Raila’s support because he wasn’t getting anywhere with his alliance comprising Wamalwa and Charity Ngilu. Kibaki and his friends accepted Raila in their political strategy because Raila was coming in with the kind of support that would make it impossible for Moi to win elections.

The product of Raila-Kibaki discussions was that the National Rainbow Coalition (NARC) was formed to take up Moi. At this point, Raila had given up his ambition to stand as Presidential candidate but he had a fallback strategy that was based on emerging as Kenya’s second Prime Minister after the 2002 elections. A deal was quickly struck with Kibaki under a secret MoU that was designed to see Raila take over the post of Prime Minister in the post-Moi era.

When Kibaki failed to deliver the PM’s post by rubbishing the MoU, Raila did not waste time. He began by setting up a strong opposition within Kibaki’s government even though he was a sitting Cabinet Minister. Using the issue of the Constitution and the theatre that was playing itself at Bomas of Kenya under the auspices of the Constitutional Conference, Raila assembled a formidable force that quickly moulted into the Orange Democratic Movement, ready to challenge Kibaki’s authority at the Referendum for a new Constitution that was held in November 2005. Although Kibaki’s team lost heavily with only members of his Kikuyu ethnic group voting for him, the PNU propaganda machine converted the formation of ODM into yet another missile to show that Raila was a political nomad who will forever be moving from Party to Party.

What PNU did not address was the tendency of Kibaki to have moved from working with Moi in KANU to the Democratic Party, which he formed, then moved from DP to the National Alliance Party of Kenya from where he moved to NARC before taking over as President in 2002. After that, Kibaki moved to PNU from where his supporters were attacking Raila’s “political nomadism.” In response, Raila told his critics that politics is dynamic and that his changing of political parties was being dictated by events and circumstances in the situation.

This series will expose seven key arguments used by the opposition in 2007 to undermine Raila Odinga’s campaigns in order to prevent him from becoming President of Kenya.