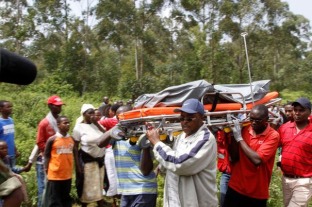 On the surface, Professor George Saitoti’s death, together with the death of his Assistant Minister, Orwa Ojode, and four others, may have been a pure helicopter accident. However, some politicians in Kenya and wananchi alike, have attempted to push conspiracy theories that the late Minister may have been eliminated by his political enemies. These allegations have mainly been based on strange circumstances thought to surround the helicopter crash and Saitoti’s political standing at the time of his death. Be that as it may, are there political circumstances that could point to a serious motive to eliminate Professor George Saitoti?

Within the Mount Kenya fraternity, Professor George Saitoti had become a stumbling block in Mount Kenya’s political game plan ahead of the next elections. First, Professor Saitoti had refused to relinquish his position as Chairman of the Party of National Unity (PNU) for Uhuru Kenyatta. This position is what forced Kiraitu Murungi, the Minister for Energy, to set up the “Mbas Alliance” which Saitoti refused to join. Despite constant public assurances by Kiraitu that Professor Saitoti would soon be joining the mbas, the mathematics Professor continued to chart an independent political line which firmly put him in the Presidential race on a PNU ticket. The biggest problem was that Saitoti had basically taken over PNU although the Party was no longer useful in the Mount Kenya Mafia’s political agenda. Could this posture have led to his elimination?

At first, Saitoti’s refusal to give up PNU to the pro-Uhuru wing of the Mount Kenya mafia cartel appeared to have been a blessing in disguise for Kiraitu Murungi. Since Saitoti was not keen on supporting Uhuru Kenyatta’s presidential bid by virtue of him standing as a candidate, and since Uhuru Kenyatta had positioned himself as the leading King-pin in Central province, Kiraitu adroitly began to exploit Saitoti’s recalcitrance to start planting himself as the main king-maker in Central. As Uhuru Kenyatta continued to weigh his options on the Party to jump into to push his presidential bid, Kiraitu believed that Uhuru would soon be confronted with little options after the son of Jomo quits KANU. It is at this point that Kiraitu believed that Uhuru would jump into his new cobbled “Alliance Party of Kenya (APK)” aka the mbas.

Kiraitu’s strategy was that once Uhuru jumped into the driver’s seat of the new mbas, Saitoti would be one of the first passengers to board followed by other leaders in Central province. However, when push came to shove, Saitoti made it clear that he was jumping into no mbas, stressing that he would go it alone for the Presidency under the banner of PNU. In assuming an independent line in relation to Kiraitu’s election strategy, Saitoti was seen more as a person who was seeking to split the Kikuyu vote at a time when the Kikuyu elite had vowed to do everything possible to ensure that Raila Odinga does not become President of the Republic of Kenya. If there are any internal forces who may have killed Saitoti as has been alleged by a cross section of MPs, it must have been because he was more destructive to the Kikuyu ruling class agenda than useful.

Another possible reason why Saitoti may have been eliminated is because the Internal Security Minister created a lot of enemies within believers in GEMA following the ICC movie which was playing in The Hague. Although every Kikuyu leader tried to oppose the process, Saitoti continued to sit on the fence. He boycotted all Prayer meetings which were being used to unleash ethnic hatred while he refused to publicly connect Raila Odinga to the tribulations of the Ocampo four as other Kikuyu leaders were doing. As a half Kikuyu who had benefited from the Kibaki government through his appointment as Internal Security Minister, the least the Kikuyu ruling class expected from him was reciprocation but Saitoti refused to give in.

The battle between Saitoti and Kiraitu on Party name
Saitoti’s abrupt independence and failure to toe the GEMA line was coming at a time when the Kikuyu ruling class could do nothing to stop him from messing up the main game plan because the term of the government he was serving had basically come to an end. Even if he were to be sacked, such a measure could have had no consequence because election was just around the corner. The best option was to get rid of him.

Another problem for Saitoti was that when Kibaki took over power, a key agenda was to ensure that top members of the Kikuyu ruling class would be protected by the state from past crimes, human rights violations, land grabbing and looting of the economy. Through the Goldenberg scandal, it is known that Saitoti looted billions of Kenyan shillings. However, when the Goldenberg Inquiry ended after guzzling millions of Kenyan shillings, Saitoti was freed from responsibility. The least the Mount Kenya Mafia expected from the Internal Security chief was support of the main cause, not opposition, division and sabotage. Saitoti was therefore seen as a thankless and self-centred renegade who utilized the GEMA controlled government machinery to cleanse his dirty image before abandoning the cartel at its hour of need. Could this circumstance have influenced a conspiracy to eliminate the Internal Security Minister?

Another big problem was that through the billions of Kenyan shillings Saitoti had stolen since his days in the former Moi’s government, the Minister was one of the biggest threats to Uhuru Kenyatta’s economic dominance among Kikuyu politicians because he was basically a billionaire. With the huge amount of resources he retained with help from his Kikuyu colleagues in government, and with a well-grounded Party he stole from GEMA, it was impossible to tell how Saitoti would complicate the situation for Uhuru Kenyatta in case the son of Jomo vied for Presidency. To prevent such complications, could some insiders have plotted his death?

Further, as Kiraitu’s mbas was being registered, Saitoti actually went to court to oppose the name of the new Party, arguing that the name “Alliance Party of Kenya” was too close to that of “Party of National Unity”. It was like adding salt to injury. In fact, it could have been the wrangles between Kiraitu and Saitoti around the Party name that may have prompted Uhuru Kenyatta to go for a totally new outfit thereby abandoning Kiraitu and his strategy. When Uhuru launched his The National Alliance, Kiraitu was a wounded man because his king-maker dream had been shattered. Convincing Uhuru to jump into the driver’s seat of the mbas Kiraitu had spent a lot of time constructing could have been an uphill task and part of the blame had to go to Saitoti who had badly complicated the Situation with his lack of support.

Orwa Ojode as Saitoti’s running mate
Worse still, insiders know that Saitoti had convinced Orwa Ojode, a Luo, to be his running mate in the next elections. Within ODM, the impending departure of Ojode from the Party was so obvious because Ojode had long detached himself from the Party, arguing that it was important for Party members to reach out to other communities. In the media, Ojode constantly took weird positions on critical issues affecting the Party, positions which disturbed some Party strategists who saw him as a silent rebel within the Party.

Within the Luo ruling elite, Ojode was seen more as a traitor than as an asset because if he quit the Party “Mudavadi style” because he had allegedly been “bought”, his departure would be used by Raila Odinga’s detractors to argue that even some of the closest friends of the Prime Minister were deserting him. At the propaganda level, this could have been very destructive. While there is no reason to argue that someone may have been baying for Ojode’s blood, his death may have been part of the “collateral damage” during Saitoti’s elimination.

The fact that Ojode was on his way to host Saitoti in Ndhiwa at a fund raiser has now been converted by some observers into the final evidence to prove that Ojode was gone kabisa. The argument is that Saitoti was an astute opponent of  Raila Odinga and that for Ojode to have side-lined Raila as the Guest of Honour at the never-to-be church function in favour of Saitoti was evidence that the Assistant minister had already made up his mind and that it was just a matter of time before he quit the Party to join PNU.

For Luo traditonalists who understood the “Ojode problem”, the death of the Assistant minister is a consequence of chira (curse) because he tried to go against the collective will of the community which is firmly behind Raila.

Although Raila has been in the front-line in mourning Ojode, it is notable that top Luo leaders have simply been shedding crocodile tears with others even failing to send condolences because for the Party, Ojode’s death is “good riddance”.

For Saitoti, working with Ojode meant that the Minister could also work with Raila if there was a run-off with unseen consequences to the GEMA strategy. Saitoti therefore had to give room. His lone ranger approach to the impending election was of no benefit to the Mount Kenya mafia. He was better dead than alive and this analysis is what is fueling the conspiracy theories alleging that Professor Saitoti may have been eliminated by powerful forces.