WikiLeaks Releases: Nairobi Cable No. 22: State House is the Epicenter of Drug Trafficking 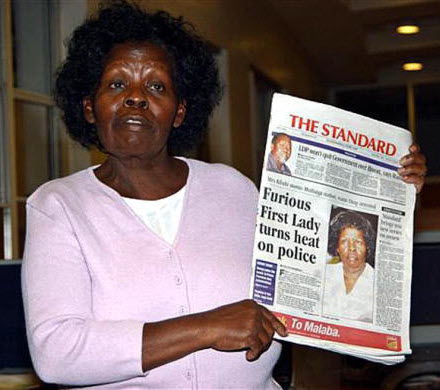 ¶1. (S)  SUMMARY: President Kibaki publicly stands firm behind the Kenyan Police raid on the Standard Media Group. Meanwhile, Standard journalists and others privately say the raids were prompted by a State House belief that the paper possesses documents implicating the President’s family in grand-scale corruption, possibly including narcotics trafficking.  First Lady Lucy Kibaki has reportedly personally threatened to “burn down the Standard” unless the information on her is relinquished. Even as the government ridicules claims of “foreign mercenaries” in the country, political opponents and journalists believe unofficial Second Wife Mary Wambui is behind the foreigners — and the cocaine trafficking. Opposition leaders say they are being blackmailed to keep quiet; shocked by the steps already taken, they privately fear a cornered government will move to arrest them, with or without charges. And they worry about the possible use of lethal force.  END SUMMARY.

UNDER SEIGE, STATE HOUSE STANDS BY ITS MAN
¶2. (C) After a week of silence, President Kibaki has spoken — he will not sack any ministers or others implicated in the March 2 police raids on the Standard Media Group (reftels). Appearing in Eldoret March 8, the President bluntly declared that even if the public “hates” the Security Minister, there is nothing they can do about it — John Michuki will stay at his post.  Notably, Kibaki made the statement in the company of three individuals known to be at war with each other over how to respond to the crisis — First Lady Lucy Kibaki (who supports Michuki), Policy Adviser Stanley Murage (allied with “unofficial” Second Lady Mary Wambui, he is long opposed to both Michuki and Lucy’s influence) and Police Commissioner Ali (incensed at having been cut out of Michuki’s order for the police raid on the media house).

FOREIGN “MERCENARIES” CONFIRMED
¶3. (S/NF) The presence in Kenya of armed foreigners working on behalf of ruling elements has alarmed many Kenyans, both in and out of government.  Despite repeated government denials, post believes foreigners were indeed directly involved in the police raids.  One journalist who escaped the raids privately tells us police contacts warned him weeks earlier that foreigners had been imported to protect the First Family from public corruption charges.  One of those arrested told PolCouns several of the March 2 raiders were white — and “no African would call us what he did.”  Another Standard journalist says a source close to State House has offered to sell the paper copies of the passport pages and work permits of the foreigners.  (Popularly called “Russians” and “mercenaries,” post has separately confirmed the foreigners are traveling on a variety of passports from what used to be termed “East Bloc” nations.)

¶4. (S) Opposition and media figures believe the “mercenaries” were imported to suppress information on State House corruption.  They assert the foreigners arrived last December — after the government got word that John Githongo, the government’s exiled corruption czar, was to go public with his detailed accounts of State House corruption. (Githongo’s ‘”dossier” was serialized in The Nation newspaper in January.)  Some believe these same foreigners played a role (via the Akasha crime family) in the 2004 cocaine shipments seized in Kenya, and have now returned to intimidate opponents (in or out of government) from releasing information incriminating State House in any illicit activities.  Philip Murgor, sacked in 2005 as Director of Public Prosecutions for investigating the cocaine, told PolCouns March 9 the mercenaries were brought into Kenya at the direction of Second Lady Mary Wambui, State House Advisor Stanley Murage and Police CID Chief Joseph Kamau (who formally was in charge of the police raids on the Standard). Wambui, it is alleged, brought them back to Kenya after a December trip to Dubai in the company of none other than Kamlesh Pattni — the man behind the Moi-era Goldenberg corruption scandal.  (Others separately told D/PolCouns this week that Wambui spent USD 600,000 cash during a December trip to Dubai.)

¶5. (C)  The mercenaries initially stayed at the Pattni-owned Grand Regency Hotel — until the media reported that fact. (NOTE:  Even before the raid, Murgor told PolCouns Pattni had wired the Presidential Suite at the Grand Regency for sound and audio; Wambui and CID Chief Kamau were said to be among those using the suite to entertain any number of Kenyan business and political figures.  END NOTE.) Focus then shifted to a house in the upscale Runda neighborhood (where a number of Embassy families reside) — until opposition LDP leader Raila Odinga March 8 provided the Police Commissioner, and then the media, with the address.

¶6. (C) Coincidentally, Emboffs stumbled upon the house on Glory Road hours before Odinga even gave his police statement.  A number of civilians were beating a man and had set a dog upon him; he escaped as neighbors went to his aid. Confronted by the angry crowd, one attacker drew a pistol and identified himself as police.  Privately, neighbors said a white foreigner moved in several months ago — accompanied by several black (but likely non-Kenyan) “bodyguards” who threatened them.  Neighbors said they had speculated that narcotics or other illicit activities were being conducted from the house. The next day, however, CID Chief Kamau publicly claimed the house had been vacant for many months. In conversation with PolCouns March 9, Presidential advisor Murage laughed at any claims of foreign involvement, claiming Odinga “is an expert in guerrilla warfare; you can expect him to claim the unbelievable.”

IT’S THE FIRST FAMILY(IES), STUPID
¶7. (S)  A Standard journalist told PolCouns March 10 the raids occurred because State House believed he was going to expose the First Family.  (NOTE:  This journalist has written the most detailed and damaging of published reports related to the December 2004 seizures of more than one ton of cocaine.  END NOTE.)  His reasons:  First, though he had nothing to do with the article that officially prompted the raid (suggesting a secret Presidential deal with an opposition leader), he was publicly sought for arrest. (Having secured a police bond against arrest, he has since submitted a statement that he neither researched nor wrote nor edited the article.)  Second, those colleagues that were arrested privately state that police officers told them they were looking for papers implicating both/both presidential wives in corruption:  Official First Lady Lucy in the Anglo-Leasing scandal and Unofficial Wife Two Mary Wambui in cocaine shipments.  One police officer, a longtime friend of the paper’s editors, confided that “this dossier is explosive and can bring down the government” — which they had been instructed not to allow.  (One of those arrested separately confirmed this to PolCouns.)

¶8. (S) Third, Four CID officers tracked down the journalist’s uncle (a senior civil servant) on Sunday, March 5.  He was told First Lady Lucy knew the nephew had “a dossier” on her — and she wanted it.  To underscore their seriousness, the police put the First Lady on the phone; she told the uncle that unless the Standard turned over the dossier they would “burn down the whole of the Standard Group.”  Fourth, Standard editor Oketch Kendo was intercepted March 8 at a city supermarket and told that the journalist had one week (until Wednesday, March 15) to turn over the dossier.  Fifth, the journalist uncle spoke to the First Lady again March 9; she reiterated the same deadline.

¶9. (S) The journalist claims he does not to know what to do — as he says he has no such dossier. (He believes that Alfred Getonga — recently sacked as Personal Assistant to the President  — left State House angry, and with a sheaf of incriminating documents.  He all but stated that Getonga had offered him documents, but that they were unable to agree on a date to meet before the raid occurred on the Standard.) He says he fears for his life. Standard management was to meet March 10 to decide whether to send the journalist abroad “until things cool down.”  He nonetheless continues to work on his next story: trying to confirm that another ship bearing a load of cocaine is to dock in coming days at Mombasa.  (COMMENT: Neither we nor the journalist can confirm Wambui’s involvement in narcotics; it’s just as likely that others are throwing her name about to protect their own activities.  END COMMENT.)

OPPOSITION GIVEN THE CHOICE: SHUT UP OR ELSE
¶10. (S) Threats of arrest and violence are also being personally directed at opposition leaders by the government. Orange Democratic Movement (ODM) opposition leaders privately
confirm that they have been told by State House and police officials to stop rabble-rousing on the issues of high-level government corruption and cocaine trafficking.  Furthermore, “We are all being blackmailed” to keep quiet, conceded one presidential aspirant — who then ticked off the bases for government threats of criminal actions against each of the major opposition figures, including himself.  The threats, he said, have been face-to-face and blunt: they could be arrested either with or without charges.  Coming straight from a meeting of ODM leaders, he claimed their general response has been “We obviously can’t stop you. So go ahead.” PolCouns urged that he and fellow opposition leaders remain civil and pacific, and to give no one a public excuse for further repression.  He agreed while readily admitting, “you know how hard it is for us politicians to keep our mouths shut.”  He thanked the USG for its rapid and direct denunciation of the raids, saying it not only forced many observers off the fence but made clear the stakes at risk.

COMMENT
¶11. (S) COMMENT: While Kenya appears outwardly calm, many of those closest to the political action are now scared. The raids on the media stunned many Kenyans, who say they never expected such a step by their post-Moi, democratic government.  Reports of foreign mercenaries, systematic threats and blackmail, and possible narco-corruption at State House now have them positively reeling.  They now fear what may come next.