To End Corruption, KRA Will Capture and Hang Corrupt Officials at Uhuru Park 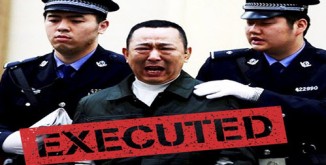 As millions of Kenyans will admit, corruption is an endemic problem in the country and no one seem to be having a solution. Subsequent governments which have come to power promising to end corruption have always ended up being more corrupt than their predecessors. For example, former President Mwai Kibaki took over power on a platform of fighting corruption but his regime ended up being more corrupt that that of former dictator Daniel arap Moi.

After Uhuru Kenyatta was rigged in by Mount Kenya Mafia cartel which was running Kibaki government’s corruption syndicates, the Jubilee government soon found itself wallowing in a sea of corruption scandals that, President Uhuru Kenyatta admitted, he cannot control because he doesn’t know what to do.

From the point of view of KRA, the fundamental problem in the war against corruption is that the causes of corruption are not well understood by Kenyans while every corrupt crook has succeeded in escaping justice after stealing from the public.

For starters, and from the perspective of socialists, corruption is part and parcel of capitalism. Although the brand of capitalism in Kenya is “deformed” in the sense that the rules of capitalism are not being followed, the existing system is a paradise for the corrupt. As long as capitalism continues to be the system of government, corruption will continue to plague Kenya. It doesn’t really matter who is in power.

To end corruption, those found to have engaged in corruption must be captured, taken into custody, tried and, if found guilty, hanged or executed. KRA recommends hanging them at Uhuru Park! Once citizens begin to understand that corruption means death, corruption will be wiped out.

In this video, Martin Ngatia, Chairman of KRA, outlines KRA’s basic principle in fighting corruption. If KRA were in power in Kenya, those who could have found themselves behind bars awaiting trial and possible execution include former President Daniel arap Moi (and all his corrupt allies in the Kabarak Syndicate), former President Mwai Kibaki (and all his allies within the Mount Kenya Mafia cartel), current President Uhuru Kenyatta, his Deputy William Ruto and all corrupt elements within Kenyatta’s Mount Kenya Mafia cartel.

Several investigations have already been done by various anti-corruption institutions (including Parliamentary bodies) but the Reports are gathering dust on the shelves. In this video, Chairman Ngatia warns that as soon as KRA comes to power, there is no single individual who has ever been mentioned in any corruption scandal who will continue to enjoy freedom. Ngatia gives the example of the likes of Ann Waiguru (allegedly Uhuru Kenyatta’s girlfriend) who carted away Ksh 800 million and is now contemplating vying for the seat of Governor of Nairobi. That is how rotten the system is.

Ngatia encourages Kenyans to wake up because Kenyans are asleep as the country is being looted. Today, it was revealed by the Business Daily that Cabinet Secretary for Health is behind a corruption scandal in which Ksh 500 billion was stolen from the Health Ministry as patients continue to die due to lack of medicine and medical equipment. The system is so rotten that unless the Socialist revolution is organized to overturn it, millions of Kenyan lives will continue to be at stake. Watch Chairman Ngatia outlining the permanent solution to corruption and subscribe to the Channel in case you haven’t done so. Enjoy.