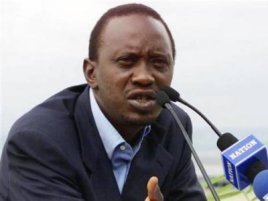 Uhuru Kenyatta: Witness intimidation and other strategies led to dropping of cases

Below is an article by a guy called, Karl Max, claiming that Kenyans should stop dragging God’s name into the withdrawal of Uhuru’s case at ICC. Do you think it makes any sense; Just read.

So, Kenyan ‘Christians’ are blaring all over, claiming that it’s their consistent prayers that ‘touched’ God who, in turn, ‘touched’ Bensouda to drop the charges. It would be so comical, if it weren’t so blasphemous.

Get this into your skull: its witness intimidation, bribery of witnesses, reckless investigations and government non-cooperation that radically weakened the case against Uhuru. I frankly don’t know whether Uhuru was guilty or not and it doesn’t matter now; what I know is that the court of conscience rarely forgives and the celestial throne is nothing like the farces staged in this world under the name of ‘justice’.

Whether its Uhuru, Ruto, Raila or whoever it was who orchestrated the violence, the sword of conscience will haunt the culprits up to their graves and even beyond. The poor lunatics who actually raped women, hacked people to death and burned innocent people in a church will have to account for each and every single crime that they committed come the judgement day.
That’s certain.

Now, back to Christians: Stop adding the sin of blasphemy into your already spilling sins. Once the rulers of this world manage to stage their intrigues courtesy of their bottomless pits of wealth and their power, stopping claiming it was God who helped them.

Even the devil with all his daredevil spirit, has never attempted to drag the name of God into the dirty affairs of men. You are exceeding the wickedness of the devil. And the horrible price for this will last up to eternity.