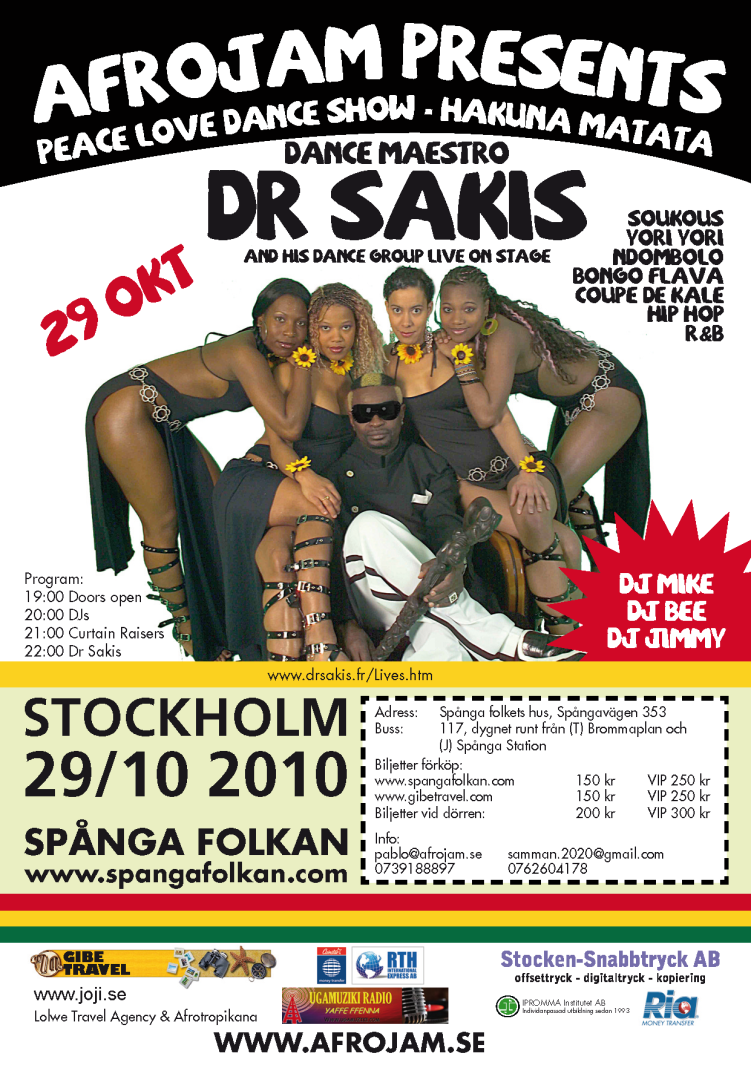 Dr. Sakis’, real name is NSAKALA EMMANUE and he was born in Congo DRC Africa. At twelve years, his interest in music and dancing began. At sixteen he created a musical comedy which he called “Les Unis”. A few years later he formed another group, “The Dynamic System” with which he still works with today.

Dr. Sakis is a varied artist, an African star and a dance legend who is all in one; a composer, setter, interpreter and a producer of most of his Albums. Since he became famous, he has produced 15 Albums, 10 Video shots on VHS and 7 on DVD.

To know more about his Albums visit http://www.drsakis.fr/Discographie.htm.
His new DVD, “Peace and Love” will invite you to a special show which is expected to be the hottest this year. Meanwhile, you have the single (CD and DVD) “the Dance Fever” (Volume 5) which is also very hot.

Dr. Sakis is an indisputable show man. His dance style and music; Modern Afro-Music, strikes you and lightens up the minds and the bodies by its wild rhythm .Through his qualitative performances, he knows exactly how to satisfy his fans during the shows and how to conquer new ones.

His sexy girls accompany him on each of his shows.They add talent, sexiness, beauty and dynamics to his shows. No one wants to miss the way they shake and role their soft bodies as if they are boneless.

After a show of Dr. Sakis, everybody describes his show as “never seen before, enticing and rhythmical”. Dr. Sakis has a strong personality with an undeniable charisma. He invites all of you have a look at his Video clips “Soft” and “Sexy-Chocolat”.