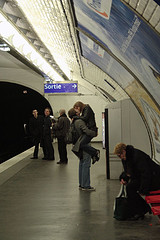 But to darker skins brought up in non white cultures (forget about black skins in white masks), kissing in public is strange, abhorable, repugnant, stale and even insane. It is disgusting to say the least.

Just like white people, dark skinned people believe that kissing is a very intimate activity from the point of view of romance but the difference for many non whites who oppose kissing in public is that  romance is something you try to keep between yourself and your partner  by privatizing it. In other words, it is not something for public consumption.

When a boy kisses a girl or when a man kisses a woman, there is the ubiquitous feeling of passion and helplessness in the face of romantic love which many dark skinned people would not like anybody else to witness, more so at a public place.

Just look at the faces of a couple kissing in the train or in the bus and you will agree that it is a moment of great helplessness especially when the couple stares at one another with love spread all over their faces. The argument from cultures in the opposition is that why should strangers have access to this very intimate activity or passionate moment?

For dark skinned people, a moment to express romantic love and affection is a precious moment which strangers should not get access to, leave alone witness unless you are kissing at the Alter and for that one moment in front of witnesses when you make vows and say “I do”. But to white people, there is no big deal in kissing in public.

The white lover will kiss and even release the familiar sound when the lips are sucking deeply into one another as the tongue engages in a mutual exchange of sweet love, exploring the mouth and its environs. In such situations, the white couple kissing tend to forget about the presence of everybody else, assuming, for that moment, that the environment belongs to them and them alone.

To non whites who have to sit there and absorb the activity with all its detail, kissing in public smacks of disrespect of other people if not arrogance. But fellow white people do not see it that way. The couple thinks that it is their romantic right to kiss in public and that whoever doesn’t like it can just pack up and move to another location or go to hell.

Take passionate kissing in the underground train station or at the local bus stop and look at how white people in the vicinity behave.  You got it. Whites will not even try to bother, look at the couple or react in a way that could suggest that they are not OK with the activity. Why? Because it is part of white culture to kiss in public.

The whites will continue to be buried deeply in their books or newspapers or just look away when another lassie’s lips are being sucked by a hungry mate dying with unlimitted passion. In the train, the kissing could go on and on until the couple arrives at their destination. For the real dark skinned, this is not just strange. It is evidence that white people are debased, immoral, uncouth and uncultured for how else can you do that in public?

To dark skins, kissing in public could be embarrassing 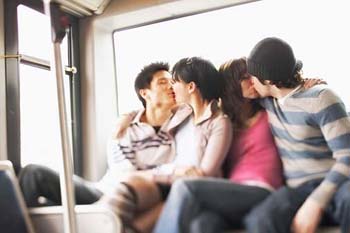 Of cause, you could understand if the kissing is taking place at a public pub or disco. Then, it is possible to assume that the couple is inebriated. This is not to suggest that kissing in public is wrong per se. My point is that it is strange or even repugnant from the point of view of other non white cultures that regard love as confidential.

Look at it this way. Dark skinned people find it even difficult to hold the hands of their girlfriends or wives in public because they are embarrassed that they are displaying love in public.

But for the whites, the opposite applies. Love is something you need to display. If you are black and you can’t hold the hands of your white girlfriend or wife in public, the white man or woman will begin to doubt whether you love him/her. In fact, you might even be dumped. Depending on the severity of the situation, talk might even begin to go round that you may be seeing someone for why can’t you kiss in public to be seen by people that you are in love?

However, a dark skinned woman might not care whether or not you kiss her in public as long as she believes that you love her. Some African contacts have theorized that the reason why white people have to kiss in public is that the male needs to compensate for his inability to satisfy the white woman in bed. I do not know whether this is true or false and it is white people who might have the authority to talk about this.

On the black side of things, the man does not need to hold hands with his woman in the streets as long as she gets her thing on bed. If you pump her well, she might not be interested in kissing you in public or holding hands because she knows where she gets her thing – in the bed room. In fact, some Kenyan couple’s never even want to be near their spouses in public and this behaviour is accepted.

Another theory which has not been proven is that white people are so emotionally weak that kissing in public helps them to cope with emotional imbalances. If you are white and you are in love with a real darkie, avoid kissing in public. This will increase your chances of maintaining the relationship.

In fact, if you kiss a darkie in front of his or her dark friends, it is sometimes interpreted as a signal that the darkie has been “conquered” to a level that he or she has lost morals. Some people might even think that someone “is making papers” and that the relationship has nothing to do with love. Simply put, kissing in public is something always regarded as an embarrassment on the part of the darkie so just slow down.