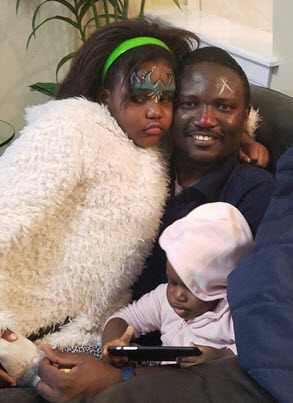 Tonny with his children in the United States

This is to inform friends, that Tonny, the son of Teresa Mawa (known in Stockholm as Mama Teresa), has passed on to be with his creator. Tonny took his last breath in the United States where he had been residing and passed on after a short illness. He departed with close family members beside him, including his loving Mom who has had to travel to the United States twice since January when Tonny fell ill.

Tonny passed on yesterday shortly after 14.00 hours (US Time). His demise has plunged the whole family into deep mourning. Following the sad news, relatives, friends and well-wishers are meeting at Teresa’s residence at Frejgatan 9 in Märsta where an “Open House” has been established. There will be special Prayers on Friday, June 15th followed by a funds-drive/final prayers on Saturday 16th June from 17.00 hrs in memory of the late Tonny.

Tonny’s big brother, Thomas (popularly known as Bob) who resides in Stockholm, will travel to the United States together with his family to attend his brother’s Memorial service to be held on Saturday, 23rd June 2018. Thomas needs to be with his family during this trying and difficult moment marked with grief, sadness and untold sorrow.

Tonny, who was 43, was a kind-hearted, amicable and very benevolent person. He was loved by all those who knew him and he will greatly be missed by all members of his family and friends together with all those who experienced his love and affection during their various interactions with Tonny.

At KSB, we send deep condolences to the entire family of Teresa Mawa following the demise of one of their loved ones. We pray that God grant the family strength and courage to go through this trying moment. Although death can come as a surprise, it is an eventual destiny of all humankind. May the family humbly accept the will of God who has re-called Tonny at his most prime-time.

For messages of condolences or further information, please, contact Milka at 0737154130. To get to the address, take train to Märsta then board bus number 580 and alight at Frejgatan. Tonny is survived by his wife and three children. May Tonny’s soul Rest In eternal Peace.