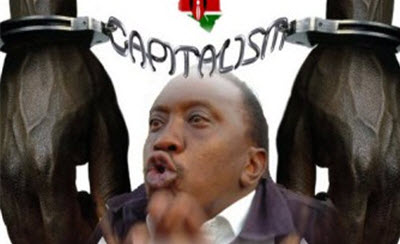 Vested capitalist interests have chained Kenya to blood sucking vampires and worthless leaders who should be in prison, not State House

President Uhuru Kenyatta went ballistic during a recent meeting with international delegates in Nairobi and hit back on former Prime Minister Raila Odinga who termed his “sour sugar deal” signed with the Ugandan government last week, as one which will disenfranchise Kenyan cane farmers, while benefiting sugar barons. Uhuru should learn to control his anger in public as it casts him in bad light, and shows he is a man who thinks having been brought up as pedigree using taxpayers money allegedly stolen by his parents, he should get everything his way.

To answer Uhuru’s tantrums, renowned author Barack Muluka penned a piece in the August 15th Standard newspaper titled: “Mr President, please get your act together, speak to us with decorum” which chided him for not using the occasion to explain to Kenyans the essence of the sugar deal. “The occasion was an astute moment for the President to justify some of the pacts under consideration between Kenya and Uganda, in the wake of his three days visit to Entebbe. A measured, methodical and reflective explanation of his position is likely to have gained him more mileage and empathy than this frenzied act”, wrote Muluka.

Jubilee noisemakers William Ruto (once accused of grabbing Adrian Muteshi’s farm) and Aden Duale (once mentioned in Parliament as dealing in illegal charcoal trade with Al Shabaab terrorists), picked the cue from Uhuru and went to Busia on August 15th for damage control, knowing so well that the Luhya community had caught them pants down lying about the Uganda sugar agreement. The Luhyas were “lured” last month with KSH1 billion by Jubilee to bail out the ailing Mumias Sugar Factory, which is based in Western Kenya. A section of the politically gullible Luhya politicians saw it as an opportunity to quit Raila’s CORD Coalition and went singing “Jubilee is the answer” to their economic progress, not knowing that the interest of Uhuru Kenyatta and his cronies is to maximize investments for personal gains, through public institutions.

For instance, part of the secretive Uganda trade deal includes exporting milk from Kenya. It is a fact that the publicly-funded Kenya Cooperative Creameries (KCC) which was killed by former President Moi’s Rift Valley cartel and was later revived by former President Kibaki, has no capacity to produce enough milk for export, let alone meeting the local demand. How then, will it supply milk to Uganda? The answer is simple. Uhuru Kenyatta’s private Brookside Diary Limited (Brookside Diaries) will supply the milk since it has the capacity, having bought out rival milk processing plants in Kenya, Ethiopia, Nigeria and Uganda. Online information indicates that: “In May 2015, Brookside Dairies paid Ksh3.5 billion (about US$40 million) for 51 percent shareholding in Sameer Agriculture & Livestock Limited, a diary processing company in neighboring Uganda, in which the Ugandan government maintains 49 percent shareholding.” Brookside is already established in Uganda, yet Jubilee sycophants are heralding the recent deal as good for the country, while it will only benefit the Kenyatta family.

Same forest, same monkeys, different eating positions
The Sunday Nation newspaper on August 16, 2015 has the headline: “Revealed: How sugar barons pushed Kenya to sign deal” with a section stating, “Mr. Museveni blamed Kenyan officials who did not understand the need for faster regional integration. “Some of the Kenyan officials are narrow-minded. They are trying to block sugar, milk and now chicken. If I said no to Kenyan products here, they would not like it,” Mr Museveni said. He vowed to take up the issue with his friend, President Uhuru Kenyatta.” How then, does Raila come into the picture yet Jubilee sycophants have rendered him “politically useless”? Ironically, no one else in Kenya gives them sleepless nights more than him, and that is why they go offensive at public rallies and on social media, when Raila reveals their rot. Jubilee should concentrate on delivering services instead of wasting taxpayers’ money traveling all over the country talking about Raila whom they deem “a non-issue.” Raila is a key Opposition leader and will talk against Jubilee at any time, since that is his work. As the Official Opposition Leader and chairman of KANU, Uhuru set a world record by crossing over to work with Mwai Kibaki’s government. He now wants Raila to work with his government so that when they squander public money, he does not mention it publicly.

During the post-election violence in 2007-08 when William Ruto was in the ODM, quite a number of Kikuyus in Stockholm were baying for his blood and demanded his head on a plate, since they blamed him for the alleged links to the Kiambaa Church massacre in Eldoret, which saw over 30 helpless Kikuyu women and children being burnt alive simply because they were Kikuyus, living among the Kalenjin. Today, that is forgotten because Ruto delivered the Kalenjin vote to Uhuru in 2013. His alleged sins have been washed away by the Kikuyus and he is now an accepted and respectable leader, whom they see as an astute businessman (despite all the nasty corruption scandals he is related with). It does not matter that some of the Kikuyus William Ruto is facing trial at the International Criminal Court (ICC) in The Hague for, are still languishing in tattered camps as internally displaced persons (ICC). Ruto can now lecture Kenyans about human rights, justice for the girl-child, fair land distribution, etc., and is enthusiastic about being the next president of Kenya in 2022.

A recent piece in the Wall Street Journal by Matina Stevis, “Bad News Dims Kenya’s Star Power” is a tell-all about the deeply-rooted corruption in Kenya. See http://www.wsj.com/articles/bad-news-dims-kenyas-star-power-1439161933

The Kenyan presidency may have to wait another century before it produces a candidate for the Mo Ibrahim Prize which “celebrates excellence in African leadership. It is awarded to a former Executive Head of State or Government by an independent Prize Committee.” The goal of the Mo Ibrahim Foundation is “to put governance at the centre of any conversation on African development. Governance and leadership lie at the heart of any tangible and shared improvement in the quality of life of African citizens.” These indicators should be taken seriously by the executive leadership in Kenya. So far, the clowns leading the country have no iota of leadership excellence.