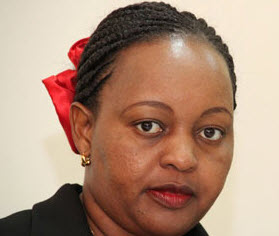 Ann Waiguru: Corrupt to the bone

Whenever the Jubilee Government led by President Uhuru Kenyatta is rocked by a financial scandal, his supporters claim no money has been lost. Deputy President William Ruto is often the loudest, especially once the matter is picked up by former Prime Minister Raila Odinga. He would then politicize and shift its focus onto Raila, whom he sees as the enemy out to ‘derail’ or ‘destroy’ the ‘development agenda’ of the Jubilee Government. Ruto often goes gaga over how they are on track with development matters compared to Raila.

Of particular interest is Ruto’s latest reaction after Raila mentioned that Cabinet Secretary for Devolution and Planning Anne Waiguru, be suspended over the latest scandal concerning questionable payments amounting to over Sh665 million, to suppliers and consultants since November 2014, through the National Youth Service (NYS). However, it was the Central Bank of Kenya (CBK) that raised the red flag on the payments, and not Raila. Ruto is very good at running away from such reality and time and again would use public platforms to hit back on Raila, who as a key Opposition leader, has the right to criticize the Jubilee government.

Why did Waiguru write to the Directorate of Criminal Investigations more than one month after she found out that there were attempts to steal Sh826 million from NYS? According to the Sunday Nation newspaper of June 21st, the NYS Deputy Director Adan Gedow Harakhe, tried to correct the situation by calling on the Integrated Financial Management Information Systems (IFMIS) Director Jerome Ocheing’, to delete the irregular payments. These are the questions Ruto should be asking, instead of barking at Raila.

Ironically, the Sunday Nation revealed that youths deployed to work for the NYS project in Kibera have not been paid for the past three months. “The more than 3,000 youth who are working for the project are supposed to earn Sh470 per day with Sh140 going to their saccos. Their pay is supposed to be consolidated for six days and paid on Saturday through National Bank of Kenya to their mobile money accounts.”

In April, around 675 NYS officers who were supervising the youth were withdrawn by the government, while the much-hyped road which was being constructed between the Kibera DC’s office and Highrise Estate has not been completed nine months after its construction began, because of lack of materials. Further, the posho mills promised by Uhuru Kenyatta for the Kibera youth which would sell maize flour at a subsidized cost of Sh60 per 2kg, are not working. The wi-fi project meant to provide free Internet access to Kibera residents has not been implemented either. The Sunday Nation noted that just before the national budget was read in June 2015, Devolution Principal Secretary Peter Mangiti had asked the Treasury to release Sh162 million for the Kenya Youth Empowerment Program, yet the program is fully funded by the World Bank to the tune of Sh1.4 billion.

Iron Lady Anne Waiguru should step aside to pave way for a thorough forensic audit of her ministry, since she is a reflection of the kleptocratic Jubilee government. While at it, congratulations to the Kenya national women’s volleyball team on winning the Women’s Africa Nations Volleyball championship for the ninth time on June 20, 2015. Sadly, the Jubilee government did not throw them a celebratory party after the match against Algeria, and many of them had to rush to fetch matatus to retreat to their slums, instead of being offered better means of transportation to appreciate their efforts. That is how much Uhuru’s Government values the youth.

Truth be told, Uhuru government is not only ravaging Kenya through mismanagement and corruption. The rotten Jubilee government is destroying the country. After coming to power through a rigged election, the looting agenda of top government officials under the supervision of President Uhuru Kenyatta should not surprise Kenyans. What should be of concern is what it will take to rectify the mess. Under the current circumstances, the country is sinking into a deep abyss.