Twenty Reasons Why Uhuru Kenyatta May Be Detained at The Hague 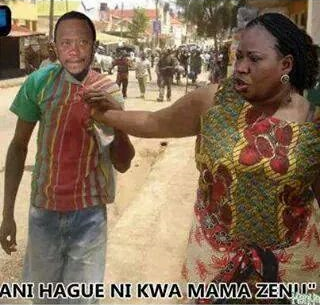 Uhuru Kenyatta in Kenya’s Social Media: Eventually nabbed by Bensouda after “many years” of being at large in Central Province issuing anti-ICC statements and mobilizing supporters to attack ICC.

By accepting to appear at the International Criminal Court, suspect Uhuru Kenyatta has demonstrated that the endless anti-ICC rhetoric (by himself and sycophants alike) since he was indicted by the court has been hot air. After mobilizing African dictators under the auspices of the AU to sign a declaration “barring sitting African heads of State” from attending ICC sessions, AU must have been humbled as Uhuru heads to The Hague to parade himself before the very imperialist powers both Uhuru and AU have been vilifying consistently.

Another reason that might have motivated Uhuru to obey ICC is because he is hoping that he will not be detained by the Court. So far, there are at least 20 reasons that ICC could exploit to detain Uhuru at the ICC. These are valid reasons and as Uhuru leaves for the Hague, his supporters should keep their fingers crossed because they may have seen the last of President Uhuru Kenyatta in case ICC decides to flex its muscles. What are the 20 reasons why Uhuru can be detained at The Hague? He has:

1. Threatened witnesses not to testify
2. Intimidated Witnesses to withdraw from case
3. Bought out witnesses to pull out of the case
4. Killed witnesses or made them to disappear
5. Denied ICC his personal financial records
6. Denied ICC key evidence in government’s custody
7. Abused ICC and Western Powers using the strongest terms possible
8. Allowed sycophants to abuse ICC at every opportunity
9. Undermined ICC in public speeches
10. Influenced the Kenyan government not to cooperate with ICC
11. Intimidated the Kenyan Media to tell lies about ICC
12. Mobilized AU to take an anti-ICC position which favored him
13. Mobilized Kenyan Parliament to pass a vote removing Kenya from ICC
14. Maintained consistent arrogance against ICC
15. Used Kenyan AG as personal Lawyer at ICC
16. Intimidated witnesses to recant evidence
17. Used government machinery to fight his ICC case
18. Views ICC as a suppressive tool of Western Imperialism
19. Mobilized African dictators against ICC
20. Constantly seeking to portray ICC as incompetent, illegal and unjust

Just as I said here at KSB, the Africa Union cover of Uhuru Kenyatta through a resolution barring him from appearing before the Court was naïve because AU has no influence over ICC. The sycophantic MPs accompanying Uhuru to The Hague are not only wasting time. They are provoking ICC. These MPs seem to believe that the more they mobilize, the more they will influence ICC to leave Uhuru alone. If ICC feels provoked, the MPs may have to return to Kenya without Uhuru Kenyatta. The best the MPs could have done is to avoid unnecessary theatrics of singing the National anthem outside ICC and remain in Kenya to serve their electorates. For now, Kenyans and the world are in for a wait and see.