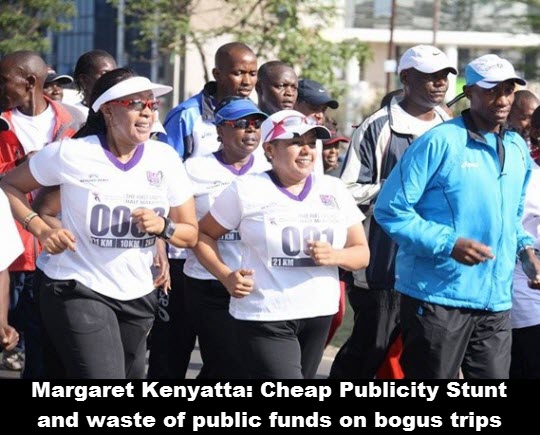 On January 24, 2014 Kenya’s First Lady Margaret Kenyatta launched the ‘Beyond Zero’ campaign which will provide prenatal and postnatal medical treatment to women and children in Kenya. On March 9, 2014 she participated in the Nairobi international half marathon (21 kilometers) to raise awareness and mobilize resources to fund pre-natal and post-natal access. Around Ksh100 million was raised. She is also participating in the London Marathon on April 13, 2014. However, does it require the First Lady to run marathons to support maternal and child healthcare in Kenya? Parallels can be drawn from the failed activities of former First Lady Lucy Kibaki soon after her husband came to power.

After she settled in State House, Lucy was concerned with disabled persons and was also a chairperson of the Organization of African First Ladies Against HIV/Aids (OAFLA). However, in 2006, she commented that: “Those who are still in school have no business having access to condoms. Those who are in university and are not married have no business having condoms in their halls of residence.” Her position contradicted Government policy which promotes the use of condoms. Being a follower of the Catholic faith, she could have been influenced by the Vatican’s then-stand on condom use. It was irresponsible for Mrs. Kibaki to utter such words because it is scientifically proven that condoms protect users against many sexually transmitted diseases. Moreover, Kenyan youths are known to be sexually active from the age of twelve and abstinence is not an option for the majority. Unfortunately, there is nothing memorable about Mrs. Kibaki’s fight against HIV/Aids in Kenya.

OAFLA was established in 2002 “as a collective voice for Africa’s most vulnerable people, women and children affected by the HIV/AIDS pandemic” (www.oafla.org). Further information indicates that it has transformed from a “forum of ideas to an institution capable of providing the continent-wide leadership needed to bring about change in peoples’ lives.” But there is no clear visibility of OAFLA, since most African First Ladies are better known for corruption and other scandals, more than improving the wellbeing of women and children. In this respect, both Lucy and Margaret are no exception. For instance in Cameroon, First Lady Chantal Biya “is famous for her hairstyles. Her signature style is called the banane, and is used for formal occasions. Biya has popularised other styles; collectively, they are known as the Chantal Biya. She is also known because of her exotic wardrobe. Some of her favourite designers include high-end Western labels such as Chanel or Dior.” (See wikipedia.org).

Mrs. Biya’s husband, President Paul Biya, has been in power since 1982 and is said to be worth around $200-$300 million, mostly invested in mansions within Europe. “The U.S. imported $544 million worth of crude and fuel oil from Cameroon in 2008 and exported $59 million worth of drilling and oilfield equipment but still the citizens don’t see all this profit.” (See therichest.com). In 2009, President Biya was widely criticized by a French online newspaper for renting a villa in France for €30,000 per day during a vacation in France, yet his country is one of the poorest in the world with 48% of its population living below the poverty line ($2,257 GDP per capita in 2011).

Beyond Zero Campaign is below par

According to unaids.org, the Beyond Zero campaign is “part of the initiatives outlined in the Strategic Framework for the engagement of the First Lady in HIV control and promotion of maternal, newborn and child health in Kenya that was unveiled on World AIDS Day 2013. The framework aims to galvanize high-level leadership in ending new HIV infections among children and reducing HIV related deaths among women and children in Kenya.” But the worst preventable killer diseases among children in Kenya are diarrhea, malaria and pneumonia. At the Kenyatta National Hospital in Nairobi, statistics show five deaths per week resulting from the three diseases.

Mrs. Margaret Kenyatta’s initiative may just be another sideshow to put a ‘human face’ to the incompetent Jubilee government which has high dreams with zero delivery. When her husband President Uhuru Kenyatta announced free public maternity care for all women as part of his 2013 election promise, it was expected that clear policy guidelines would be drawn to ensure its smooth implementation. However, almost a year later, there are not enough skilled professionals and adequate equipment to control maternal-child mortality. A UNICEF report released in September 2013 indicated that “in Kenya, 73 children out of 1,000 births die before age five.” (See Committing to Child Survival: A Promise Renewed).

#sickat50 was a trending hashtag on Twitter during Kenya’s 50th Independence anniversary in December 2013 by the Kenya Medical Practitioners Pharmacists and Dentists Union (KMPDU) that tweeted: “We will witness the worst migration of doctors out of public service and out of Kenya. It will only be comparable to the doctor migration of the 1980s.” By March 2014, there were 18 public hospital doctors resigning per month in various counties. Dr. Wambui Waithaka who is co-founder and the National Treasurer of KMPDU wrote that: “Today’s resignations have the following reasons attached to them: “mismanagement of the devolved health functions by the county governments with missed salaries, reduced salaries (caused by omission of certain allowances that make up the doctor’s salary), frozen promotions of those due for promotion and delayed salaries that delay standing obligations such as rent and other bills). Frustrations on tribal lines with some county teams blatantly discriminating doctors on ethnic grounds and poor morale. Doctors are loosely advised by members of the county government to migrate to counties where their tribesmen can be found in larger numbers.” (In http://www.wambuiwaithaka.com).

President Uhuru Kenyatta is already in London with his entourage of Jubilee sycophants to cheer the First Lady during the marathon. This is at the expense of Kenyan taxpayers, yet the health sector is on its knees. The cost of his trip and that of his wife and her team reflects the Jubilee government’s continuous wastage of public resources. Mrs. Kenyatta does not need to run marathon races to buy mobile clinics for the 47 counties to improve maternal-child healthcare. The awareness is already there and money is available, yet as long as corruption is not uprooted, her initiative will fail. Fifty years after attaining independence, the doctor-patient ratio in Kenya is still 1:18000 against the World Health Organization’s recommended ratio of 1:1000. The Jubilee Government should monitor the devolved healthcare programs at the county levels to ensure efficiency. Further, there are so many governmental efforts and international initiatives such as the Millennium Development Goals that need to be streamlined instead of creating new ones.

Apart from this entourage being funded by the tax payer, Uhuru Kenyatta arrived in London together with his own entourage comprising of sycophants, sidekicks, lapdogs, bootlickers, parasites, security detail and an assortment of idlers who follow the President everywhere. At a time when more than 10 million Kenyans are faced with starvation; doctors are resigning from government hospitals due to poor pay and lack of medical equipment; millions of children are dying out of treatable diseases and the Jubilee government failing on each and every election pledge, First Lady Margaret Kenyatta’s trip to London in the name of marathon is a big waste of both public resources and valuable time that could have been used in building the Nation.

Seriously, Kenyans ought to see through the cheap antics of the First Lady whose London trip is wasting the very funds she claims, she is trying to raise. Instead of seeking cheap publicity by exploiting the enormous suffering of millions of poor Kenyans as a result of a collapsed health care system and decayed infrastructure in the health sector, the First Lady should be advising her husband on ways of curbing corruption in government because then, she wouldn’t need to go around town running in fake marathons.

Succinctly put, the First Lady’s marathon project is nothing but a cheap publicity stunt to try and give the callous Jubilee government a human face. The “Beyond Zero” campaign is totally below par, does not cut and has nothing to do with improvement of health care in Kenya. On the contrary,  it has more to do with the notorious culture of overt deception and hoodwinking of the poor by Kenya’s corrupt and rotten ruling class represented by the President, the First Lady and Company. Kenyans must wake up and see through this deception.