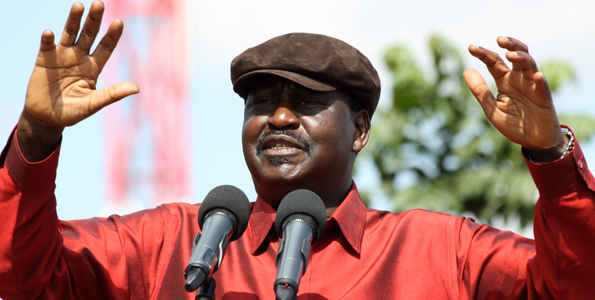 Raila: The man to beat in 2012 Presidential election in Kenya

Last weekend I was a camp follower on Prime Minister Raila Odinga’s tour of Kiambu & Muranga. My decision to do this was based on a desire to hear for myself what he has to say about perceptions, stereotypes and narratives that members of my community (Kikuyus) hold against him. I was especially keen to see whether he would talk about the Post Election Violence of 2008, what he thinks about the Kikuyu as a community, and his opinion on the ICC. He did.

He started by giving a summarized lecture of the history of political change in Kenya, starting from the fight for independence and the role of the Mau Mau, to resistance efforts against Moi’s authoritarian rule, to the struggle for multi-party democracy, and KANU’s defeat in 2002. He talked about the failed constitutional review process of 2005 and related it to an elite group around Kibaki who sabotaged the Bomas process because they believed we did not need to change the constitution now that Moi was gone. An interesting observation was that his father as part of a political minority agitating for Jomo Kenyatta’s release in the ‘60’s faced stiff opposition from other politicians including several prominent Kikuyus.

One of the prominent narratives in Central province is that Raila cannot stand people from the Kikuyu community. Raila addressed this by asking what Kikuyus thought they have done to him that they would be afraid that he would want to revenge. I learnt that as far as he is concerned the average Kikuyu has nothing to fear from him because they have never fallen out at any point. I learnt that as far as Raila is concerned his differences are strictly with the political establishment from the region, and that he is aware that the average person from any community suffers the effects of bad leadership, even if the bad leaders are from their community.

I also learnt that Raila’s differences with the Kikuyu political elite stem from their abhorrence of his people-based politics, so it is about issues not ethnicity. An interesting illustration was that even Jaramogi worked well with Kaggia, whilst Kenyatta worked well with Mboya, which goes to show that it was never about tribe even then. On the issue about whether he has a problem with their entrepreneur spirit he explained that he is also a businessman and understands their role in building the nation, and would thus never attack anyone for creating wealth. His final comments on this were that the fact that he had worked with Moi even after 9 years of hard detention proved he did not keep grudges even with the political elite.

Another narrative he addressed was that he cannot work with Kikuyus. He argued that such propaganda was false because in the past he had worked with Kikuyu leaders like Muite, Matiba and Rubia. He also reminded us that when Kibaki was involved in an accident at a critical point of the Presidency he is the one who took personal responsibility of Kibaki’s Campaign and took the lead in campaigning for him to be President. He said his later fall-out with Kibaki was because of the political elite around Kibaki, who reneged on political agreements put in place prior to their victory. He explained that despite that betrayal he had still worked in Kibaki’s government as Minister until the parting of ways because of the constitution.

Kriegler, Waki Commissions, ICC and Raila
On the issue of whether ODM was formed to fight Kikuyus I learnt that ODM was a response to efforts by the political elite around Kibaki (again) who had taken advantage of Kibaki’s illness to sabotage the Bomas process. I learnt that the result of this was a constitution that was unacceptable to many Kenyans, including the leader of the Official Opposition at the time, who is the current Deputy Prime Minister, Uhuru Kenyatta. This forced a large section of the Kibaki’s government, including Raila & Kalonzo, to break ranks with the government position and campaign against the proposed constitution in 2005. It was interesting to note that this means they actually joined Uhuru Kenyatta’s camp, who was then leader of the Opposition against Kibaki. Once the proposed constitution was defeated the rebels in government were fired and they then formed the Orange Democratic Movement (was Uhuru the de facto Boss of ODM at any point?)

This argument is then that ODM could not have had a policy against Kikuyus as a community since some of its key founders included prominent Kikuyus. I was shocked to learn that Uhuru was actually associated with ODM at senior level up until four months to the general elections of 2007! Somehow the story of the first opposition leader in the world to defect to the incumbent’s side keeps slipping our minds. The question I hope Uhuru will answer is whether he knew what ODM’s 2007 plans were? Were they planning to attack Kikuyus? Why didn’t he publicly denounce them?

Then there is the Post Election Violence. In Central Kenya the actual question is whether he was involved in the massacre of Kikuyus in Rift Valley province. An interesting rebuttal was that if this were the case there would have been similar incidences in Nyanza. Then the question as to whether the calls for Mass Protests were a subtle message for violence, and the response is that mass protest is a constitutional right available to anyone who feels a political process is not fair. It seems its turning to violence was based on anger when ODM members realized that the existing judicial system would not deliver justice to their grievances. I guess what would be interesting to hear from Raila is whether he thinks there were elements within ODM that found an opportunity in this confusion, to violently settle issues that were not related to the elections. I guess we will learn this from the ICC process.

Then the Big One! Is the Prime Minister behind the name that Ocampo came up with as suspects in the ICC cases on the Post Election Violence. (Okay, even I find this a silly idea but hey …)

The PM reminded us that when the international community stepped in, he and Kibaki agreed to negotiate and formed the 8-pax committee that came up with Agenda 4 items. Two of the outcomes of this process were the Kreigler and Waki Commissions, where the Kreigler Commission confirmed that the 2007 elections were so flawed that we would never know who won the elections. He reminded us that Waki Commission went round the country collecting information, holding public hearings, and receiving submissions from various organizations on the PEV. This Commission also stated that those guilty must be punished if Kenya is to avoid a re-occurrence and suggested that this should be done either through a Special Tribunal locally, or at the International Criminal Court at the Hague. They also came up with a list of people they felt held the highest responsibility and needed to be investigated further: the famous Waki Envelope. The Waki Commission findings were handed over to the President and to Kofi Annan in his position as head of the Eminent Panel that had mid-wifed the Coalition government Raila also reminded us how he and President Kibaki aggressively lobbied Parliament for the local option, but lost against the concerted efforts of parliamentarians who argued that the local option was easy to manipulate and would not bring about the desired justice. This left the ICC option and Ocampo sought and got permission to investigate the PEV, and came up with information that pointed to 6 people. He reminded us that it was only after the names were mentioned that all hell broke loose and the MPs initially behind the Hague option then decided to blame him for their friends being at the Hague.

I am not sure how much impact his tour had in the wider scope of Central Kenya politics but I am really glad he went, and that he tried to address what the perceptions and stereotypes we have about him, as people of Central Kenya. I say this because one of the challenges of having a political conversation in Central Kenya about the weaknesses and strengths of Raila is that we never seem to be able to tell the chaff from the wheat.

I also hope we will see more of such forays by all national leaders into those regions where ethnic stereotypes and perceptions about them contribute to inter-ethnic tension. Maybe we can still slay the ogre of ethnic demonization by 2012 such that we will be vetting our next leaders on what they have done, are doing, and continue to do, rather than on where they come from, whose son/daughter they are, or their tribe or race. Even God, in the book of Kings in the Bible judged politicians by their deeds, not their words or motives.

The writer is a member of “Kikuyus fo Change”